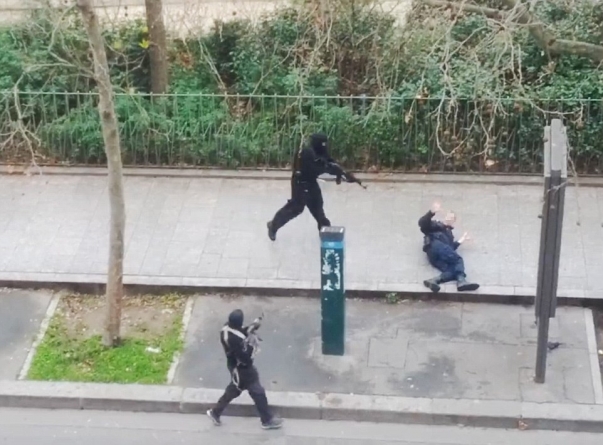 With blood spilt on sketch papers and stained in footprints on the floor, this is the awful aftermath of the Charlie Hebdo massacre. The first photograph of the office shows the utter devastation caused when Islamic fanatics stormed the magazine’s offices as its journalists met to discuss a conference on racism. In the chaos which followed, the office was turned upside down. This shocking image was published online last night by France’s Le Monde newspaper. The picture was taken at the office of Charlie Hebdo at No 10, Rue Nicolas-Appert in the historic Le Marais district of Paris. The photograph shows chairs overturned by a large puddle of blood, under five cartoons stuck to the wall. Someone’s jacket is still hanging over the back of a chair, beside a discarded mug. Papers can be seen strewn across the ground, covered in the blood of those who had been working on them hours earlier. Newspapers and books can also be seen on the floor, while some appear to have been sketched on. In the mayhem, they appear to have been trampled on, with blood-covered shoes staining them red. And like countless other offices, notes and cards adorn a corridor wall. But here, police tape has also been attached to a door. One of the cartoons on the wall appears to be the sketch for the controversial ‘Sharia Hebdo’ front page, which sparked the previous terrorist attack in November 2011. The firebomb – which destroyed the magazine’s computer system but failed to injure anyone – came after the publication ran an issue supposedly guest-edited by Mohammed, containing cartoons of the Muslim prophet and the slogan: ‘100 lashes if you don’t die of laughter’. After the attack the publication responded in the way it knows best. A video from the scene of Wednesday’s massacre shows officer Ahmed Merabet – believed to be a Muslim – lying wounded on the pavement and begging for mercy before being shot at point-blank range by the terrorists. As they approach, the 42-year-old is seen raising his hand in appeal for mercy, before asking: ‘Do you want to kill me?’ The gunman then answers: ‘OK chief’ before shooting him through the head with the assault rifle. The gunmen then return to the car driven by an accomplice, sparking a massive manhunt which was continuing last night. The shocking images were broadcast all over the world, depicting the sheer brutality of the horror that unfolded in the attack at the Charlie Hebdo offices in Paris, in which 12 innocent people were killed. Among the victims, the Al Qaeda assassins – identified as two brothers and an 18-year-old accomplice, all with Algerian links – shot dead two policemen. The massacre was condemned around the world as an assault on freedom of speech. The magazine, which mocks politicians and religions alike, was firebombed in 2011 after carrying a caricature of the Prophet Mohammed. Nine of its staff were killed in Wednesday’s atrocity, including the editor and three cartoonists. It was France’s worst terror attack since 1961. Opposition MP Jacques Myard said: ‘We are at war, the Western nations – like Britain, France and Germany.’ The hooded, heavily armed gunmen – described by police as operating like a commando unit – told witnesses they were from Al Qaeda and trained in Yemen. Last night the Paris outrage was being seen as the ‘spectacular’ that Al Qaeda had been threatening since the dramatic rise of Islamic State replaced it as the most feared jihadi organisation.

The suspects were named as Said Kouachi, 34, his brother Cherif, 32, and Hamyd Mourad, 18. A police operation took place late lat night the north-eastern city of Reims, where Said lived. Early this morning, a source close to the case said Mourad surrendered to police ‘after seeing his name on social media’ and was arrested at an undisclosed location. Dozens of members of the elite anti-terror unit were surrounding an apartment building. The Kouachi brothers hailed from the Paris suburb of Pantin, where Cherif still lived. He was convicted in 2008 and jailed for three years for his association with a group sending jihadist fighters to Iraq. Hamyd is believed to have been living recently in Charleville-Mezieres, in the French Ardennes. All three men had Algerian origins. The massacre at the second-floor offices of the magazine in the heart of the French capital appeared well planned with gunmen calling out names of journalists and cartoonists before shooting them. Police union official Rocco Contento warned: ‘There is a possibility of other attacks and other sites are being secured.’ As soldiers took to the streets of Paris: Aquarters of Charlie Hebdo in Bastille just hours after it had tweeted a satirical cartoon of Islamic State’s leader Abu Bakr al-Baghdadi. The gunmen appeared to know that an editorial conference of the magazine’s key staff was taking place and chose their targets by name, seemingly selecting them from among colleagues. Four of France’s most revered cartoonists – Stephane Charbonnier, 47, Georges Wolinski, 80, Bernard ‘Tignous’ Verlhac, 57, and Jean Cabut, 76, died as the gunmen ran amok shouting out ‘Allahu Akbar’ (God is great) between rounds of automatic gunfire. Known by his pen name Charb, Mr Charbonnier, edited Charlie Hebdo, and had been the target of death threats. He was included in a 2013 Wanted Dead or Alive for Crimes Against Islam article published by Inspire, the terrorist propaganda magazine published by Al Qaeda. A police bodyguard assigned to him after the magazine’s offices were attacked in 2011 was among the first to die on Wednesday, at around 11.30am local time. Others killed were named as Michel Renaud, a guest editor, and 73-year-old cartoonist Philippe Honoré.

Minutes earlier, cartoonist Corinne Rey had been forced to let the gunmen into the office block in the 11th arrondissement of Paris after returning from collecting her young daughter from a nursery. ‘I had gone to pick up my daughter at day care, arriving in front of the magazine building, where two masked and armed men brutally threatened us,’ said Miss Rey, who draws under the name Coco. ‘They said they wanted to go up to the offices, so I tapped in the code,’ said Miss Rey, referring to the security system on the interphone. Miss Rey and her daughter hid under a desk, from where they saw two cartoonists murdered. ‘They shot Wolinski and Cabu,’ she said. ‘It lasted five minutes.’

Miss Rey said the men ‘spoke French perfectly’ and ‘claimed they were ‘Al Qaeda terrorists’. Calmly leaving behind a scene resembling a war zone with bullet-riddled windows, blood-stained floors and walls and the cries of the dying and wounded, the men ran on to the street outside – their exit and horrific murder that followed captured on a video taken from a nearby rooftop. Witnesses said they heard the gunmen shouting ‘We have avenged the Prophet Mohammed’, ‘God is Great’ in Arabic and boasting ‘We have killed Charlie Hebdo’. The gunmen made their escape stopping to kill Mr Merabet and then to hijack a car after their vehicle was damaged in a crash. Appealing for national unity, President Hollande said: ‘We are threatened because we are a country of liberty.’ Charlie Hebdo’s website, which went offline during the attack, is showing the single image of ‘Je suis Charlie’ (I am Charlie) on a black banner, referring to a hashtag that is trending on Twitter in solidarity with the victims. -dailymail