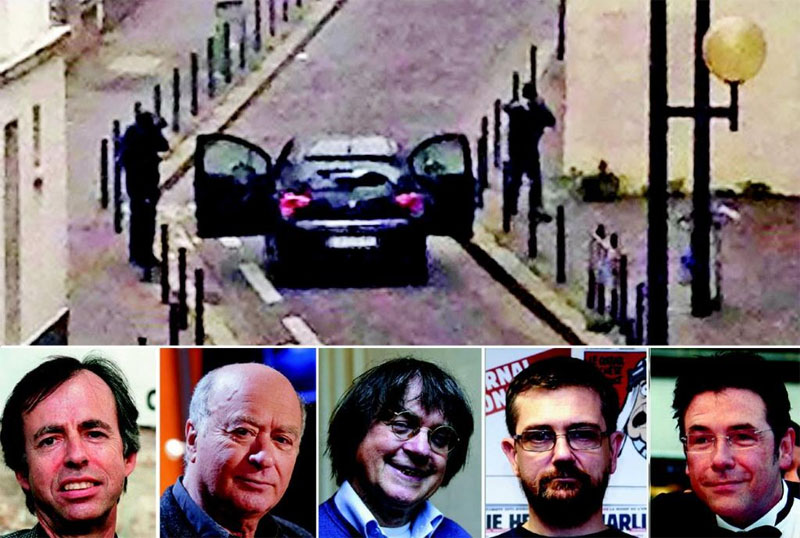 One man sought in the deadly shooting at a French satirical paper has turned himself in, and police hunted Thursday for two heavily armed men with possible links to al Qaeda in the military-style, methodical killing of 12 people at the office of a satirical newspaper.

President Francois Hollande, visiting the scene of France’s deadliest such attack in more than half a century, called the assault on the weekly newspaper Charlie Hebdo “an act of exceptional barbarism.“ France raised its terror alert system to the maximum, Attack Alert, and bolstered security with more than 800 extra soldiers to guard media offices, places of worship, transport and other sensitive areas. French Police, earlier on Thursday, identified three men, including two brothers, as suspects in the attack at the offices of weekly satirical newspaper Charlie Hebdo, as security officers fanned out around the Paris region in a manhunt. One police official said the men had links to a Yemeni terrorist network. Witnesses of the attackers’ escape through Paris said one claimed allegiance to al Qaeda in Yemen. Two police officials named the three suspects as Frenchmen Said Kouachi and Cherif Kouachi, who are brothers and in their early 30s, as well as 18-year-old Hamyd Mourad, whose nationality wasn’t immediately clear.

The officials spoke on condition of anonymity because they weren’t authorised to publicly discuss the sensitive and ongoing investigation. Cherif Kouachi was convicted in 2008 of terrorism charges for helping funnel fighters to Iraq’s insurgency, and sentenced to 18 months in prison. During his 2008 trial, he told the court he was motivated by his outrage at television images of torture of Iraqi inmates at the US prison at Abu Ghraib. Hooded gunmen stormed the Paris offices of a weekly satirical magazine, killing at least 12 people, including two police officers in the worst militant attack on French soil in recent decades.

Charlie Hebdo (Charlie Weekly) is well known for courting controversy with satirical attacks on political and religious leaders. Victims included four prominent cartoonists, among them the editor-in-chief, Stephane Charbonnier, who had lived under police protection for years after receiving death threats. The chief editor was holding a morning meeting when the assailants armed with Kalashnikovs burst in and opened fire . The three other cartoonists who died were Jean Cabut, Georges Wolinski and Bernard Verlhac.

Two assailants were captured on video calmly leaving the scene after the shooting. A police union official said the assailants remained at liberty and there were fears of further attacks. France Info radio said police had confirmed 10 injured. Police informed Reuters that of the 10 wounded, five were injured critically. There were no immediate arrests and no immediate claim of responsibility for the shootings.

A tweeter from al Qaeda’s Yemeni branch, al Qaeda in the Arabian Peninsula, who communicated Wednesday with The Associated Press, said the group is not claiming responsibility, but said it might have inspired the attack. The satirical newspaper gained notoriety in Feb 2006 when it reprinted sacrilegious cartoons that had originally appeared in Danish daily Jyllands-Posten. The cartoons set off a wave of violence in the Middle East which claimed 50 lives. A firebomb attack gutted the headquarters of Charlie Hebdo in November 2011 after it put an image of the Prophet Mohammad (PBUH) on its cover.