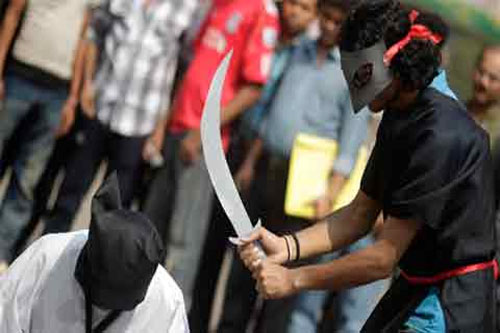 Saudi Arabia beheaded a Pakistani convicted of heroin smuggling Tuesday, the interior ministry said, bringing to four the number executed in two weeks. It said a Saudi national was also executed in a separate case, raising to 61 the number of death sentences carried out in the kingdom this year, according to an AFP tally.

Rahma “was caught smuggling a large quantity of heroin,” SPA said. Three other Pakistanis found guilty of heroin smuggling have also been beheaded this month, two of them in the Eastern Province. Also on Tuesday, Mohammed bin Noun bin Nasser Al-Dhufairi of Saudi Arabia was executed in northern Jawf region for smuggling amphetamines pills, SPA said.

The interior ministry says the government “is keen on combating narcotics due to their great harm to individuals and society.” A United Nations independent expert called in September for an immediate moratorium on the death penalty in Saudi Arabia.

Christof Heyns, the UN special rapporteur on extrajudicial, summary or arbitrary executions, said trials “are by all accounts grossly unfair” and defendants are often not allowed a lawyer. He said confessions were obtained under torture. -AFP