Ukraine Crisis: US troops land in Poland for Exercises

The first contingent of US troops has landed in Poland for military exercises amid tensions with Russia over Ukraine. An initial 150 soldiers are to be followed by a further 450 within days. Separately, the UK, Netherlands and Denmark scrambled fighter jets after Russian military aircraft were spotted approaching their airspace. 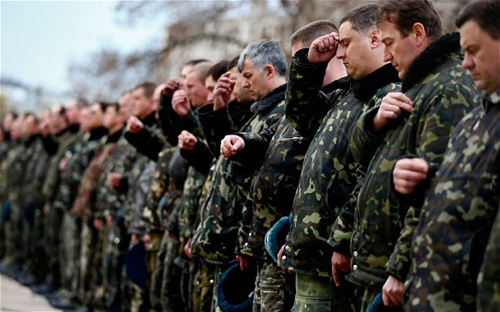 US President Barack Obama accused Russia of flouting last week’s deal on Ukraine. Moscow said it would respond to any attack on its interests there. Speaking on Russian state TV channel RT on Wednesday, Foreign Minister Sergei Lavrov drew a parallel with the 2008 Georgian war, saying that if “the interests of Russians have been attacked directly…. I do not see any other way but to respond in full accordance with international law”. Mr Lavrov also accused the US of “running the show” in Ukraine, and that it was “quite telling” that Kiev had re-launched its “anti-terrorist” operation in the east on Tuesday during a visit by US Vice-President Joe Biden. 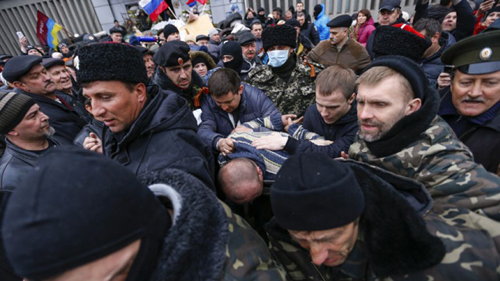 US state department spokeswoman Jen Psaki dismissed his comments as “ludicrous”. “Our approach here is de-escalation. We don’t think there’s a military solution on the ground,” she said. The 150 soldiers from the 173rd Airborne Brigade arrived in the Polish town of Swidwin from their base in Vicenza, Italy. Stephen Mull, the US ambassador to Poland, said the US had a “solemn obligation in the framework of Nato to reassure Poland of our security guarantee”. ergei Lavrov: “You cannot avoid the impression they [US] are running the show” President Barack Obama told a news conference in Japan on Thursday that Moscow had failed to halt actions by pro-Russian militants in Ukraine. “We have seen them not abide by the spirit or the letter of the agreement in Geneva,” he said, adding that the US had further sanctions against Russia “teed up”.

The US troops are expected to be carrying out military exercises in Poland as well as in Lithuania, Latvia and Estonia for the coming months. There has been growing concern in those countries at the build-up of thousands of troops in Russia along its borders with Ukraine in recent weeks. Meanwhile, the UK’s Ministry of Defence (MoD) has confirmed Russian military aircraft had been identified approaching the north of Scotland, but they turned away shortly after fighter jets were scrambled to investigate. Military officials in the Netherlands and Denmark confirmed they too had scrambled jets to escort the jets away from their airspace. “We just followed them and just turned back when we reached Germany,” 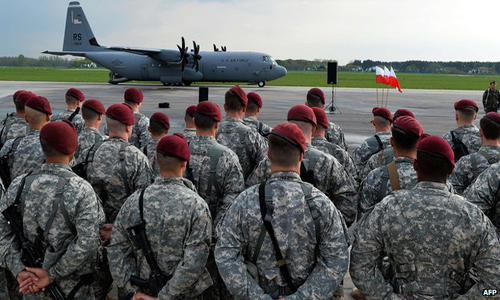 Anders Fridberg, spokesman for the Danish Defense Command, was quoted by the Associated Press as saying. And in the seas around the UK, a Royal Navy warship is shadowing a Russian destroyer in what the MoD described as a “well established and standard response” as it sails past British territory. But the focus of the tension remains eastern Ukraine, where pro-Russian separatists have taken over administrative buildings in at least a dozen towns in a bid to seek closer ties to Moscow. The Kiev authorities responded to the occupation by carrying out an “anti-terror” operation, which resumed on Tuesday after being suspended over the Easter period.

The US has called on Moscow to ask pro-Russian gunmen to lay down their weapons and leave public buildings. It has also urged Russia to tone down its aggressive rhetoric or face further sanctions. Russia’s foreign ministry again on Wednesday repeated its call for Ukraine to withdraw its military units from the region. Unrest began in Ukraine last November over whether the country should look towards Moscow or the West. -bbc

Ukraine Crisis: US troops land in Poland for… by thetimesofpakistan