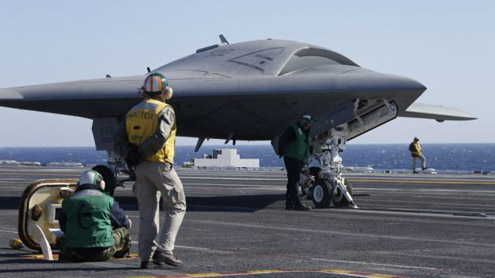 France, Germany and other European countries have formed a ‘drone users club’ to develop a rival to the U.S. and Israeli pilot less aircraft that dominate the field.

French Defense Minister Jean-Yves Le Drian said the European De fence Agency has been tasked with drawing up a list of military requirements. Its ultimate goal is to create a European generation’ of drones within 10 years. Some Europeans fear they are falling behind in an area that may determine military aviation’s future. Many aerospace experts believe the days of piloted fighter aircraft are numbered.

In June, three major European defense contractors – pan-European EADS, Italy’s Finmeccanica and France’s Dassault – called for a concerted effort by Europe to catch up. What Le Drian called a ‘club’ is open to any European Union nation that operates drones or intends to within five years. The group was established at a meeting of European Union de fence ministers in Brussels.

France, Germany, Greece, Italy, Netherlands, Poland and Spain joined, the European De fence Agency said in an announcement. During its intervention this year against Islamist in Mali, France relied on U.S. drones as well as refueling planes. Germany already uses unarmed drones, including the Israeli-built Heron 1 model, for reconnaissance purposes in places such as Afghanistan.

Last summer, German Defense Minister Thomas de Maiziere said his country would work with France to develop a new generation of armed aerial vehicles. ‘We have a gap in our capabilities that we would like to close,’ he said. The European Defense Agency said it will now consider military requirements, costs, technological capabilities and other factors, and draft a report that could become the basis of a European drone program. -Dailymail