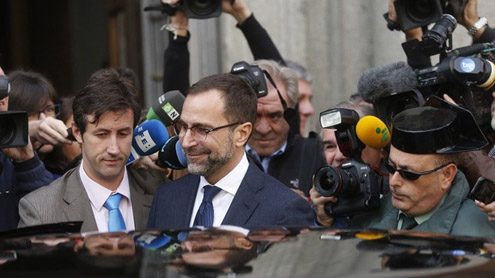 A Spanish newspaper said Tuesday it will hand over to a prosecutor documents it claims show Spain was a target for surveillance by the U.S. National Security Agency.

Spain’s prosecutor’s office opened a preliminary inquiry into the allegations a day after El Mundo published the first document last Monday. The inquiry will establish whether a crime was committed in Spain and if a formal investigation should be opened. Earlier this month, French paper Le Monde also reported similar allegations of U.S. spying in France and German magazine Der Spiegel said Washington had tapped Chancellor Angela Merkel’s mobile phone.

The leaders of Brazil and Mexico also were reportedly spied on. El Mundo’s decision to hand over the documents is different from how other media companies have dealt with such requests. The Guardian refused to hand over Snowden files to authorities, but instead agreed to destroy a physical copy in the presence of the U.K. intelligence agents. EL Mundo said the prosecutor had sought the documents after the paper published photographs of them, saying they show the NSA tracked some 60 million Spanish phone calls in one month alone and that Spain and other countries had cooperated with the NSA in monitoring communications.

It said the alleged spying violated Spain’s data protection law and that the newspaper had called on the prosecutor’s office last week to open an investigation. The newspaper’s chief news editor, Vicente Lozano Garcia, said the company had no problem handing over the documents given that a judicial inquiry had been opened and that El Mundo had already published them. El Mundo said the documents were among those leaked by former NSA contractor Edward Snowden, who is wanted by the United States but has been granted asylum in Russia.

El Mundo’s stories last week were co-written by Glenn Greenwald, a journalist who originally revealed the NSA surveillance program based on leaks from Snowden. El Mundo said it had reached a deal with Greenwald to have the exclusive on the Snowden documents relating to Spain. Allegations of NSA spying on allies have irked European countries. Spain insists it is unaware of any spying but demands an explanation from Washington. Spain’s intelligence services chief will brief Parliament behind closed doors on Wednesday. The NSA acknowledges European phones were monitored as part of a NATO program but insists it didn’t act alone. -Yahoo