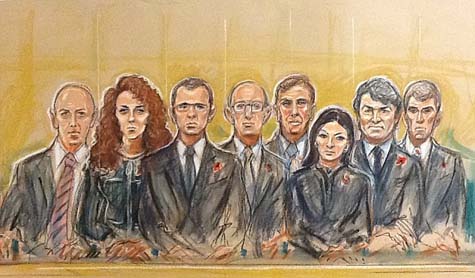 The phone hacking case has put ‘British justice on trial’, a judge declared yesterday. In an extraordinary address to the jury hearing the case of former News International chief executive Rebekah Brooks and ex-Downing Street spin doctor Andy Coulson. Trial judge Mr Justice Saunders stressed that the stakes could not be higher for Britain’s judicial system. ‘In a way it is not only the defendants on trial, it is British justice on trial,’ he said. He made the unprecedented comments as a jury of nine women and three men were sworn in to try Brooks and Coulson, both 45 and both former News of the World editors. They are accused with others of being part of a six-year conspiracy to hack the phones of public figures at the now-defunct Sunday tabloid.

Ahead of the case opening later today, the judge issued a lengthy series of instructions to the Old Bailey jury, telling them: ‘I’m going to give you some extremely important directions. ‘They are always important, but they could not be more important than they are in this particular case. ‘It is a central principle of our system of trial by jury that you decide your verdicts on the evidence and arguments you hear in court, and only the evidence and arguments that you hear in court.’ The judge said there had been an unprecedented amount of publicity about the case, some of which was ‘offensive and demeaning’ to some of the defendants.

He told them to disregard an inflammatory cover of the current edition of Private Eye featuring Brooks, telling them to ignore what he called a joke ‘in especially bad taste’. Jurors were also told to ignore comment on the case on Twitter and other social media sites. In a dig at celebrity tweeters, he said: ‘Some public figures – well-known actors, musicians, politicians and others – publish blogs and send tweets in which they not only express their views on their own areas of expertise, but also on topics about which they know very little.‘I very much hope they will not do so during the trial. They may well be breaking the law if they do so and appropriate action will be taken if they do.

‘The internet is often fuelled by speculation. There has been a great deal of publicity about the subject matter of this case, perhaps an unprecedented amount. ‘A significant amount of publicity and speculation has been inaccurate and misleading. Some, particularly on the internet on Twitter, has been offensive and demeaning to some of the defendants. A lot of it is ill-informed and most of it is abusive.’

Jurors were warned they could face jail for contempt of court if they ignored the judge’s directions. Brooks and Coulson allegedly conspired with former News of the World head of news Ian Edmondson, 44, the tabloid’s ex-managing editor Stuart Kuttner, 73, and others to illegally access voicemails between October 2000 and August 2006. Brooks is also charged with conspiring with others to commit misconduct in public office linked to alleged inappropriate payments to public officials. She also faces allegations of conspiracy to pervert the course of justice – one with former personal assistant Cheryl Carter, 49 – over the alleged removal of material from News International.

Brooks, her husband Charlie Brooks and former head of security at News International Mark Hanna are also accused of conspiring together to pervert the course of justice. Coulson, David Cameron’s former spin doctor, is also charged with conspiring with the News of the World’s former royal editor, Clive Goodman, 56, to commit misconduct in public office.

Amid Outrage in Europe, NSA Chief Defends US Surveillance Programs