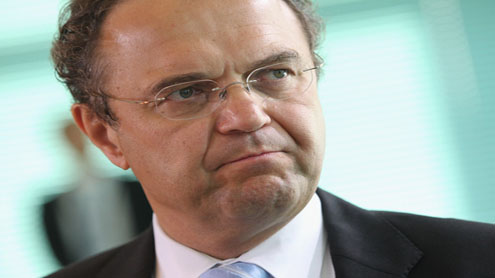 “If the Americans intercepted cell phones in Germany, they broke German law on German soil,” Interior Minister Hans-Peter Friedrich told the Bild am Sonntag newspaper, adding that he wants “complete information on all accusations.” “The confidence in our ally, (the) USA, is shaken,” Friedrich said, according to Bild am Sonntag.Obama promises changes
Citing an unnamed intelligence officer, the German newspaper also reported Sunday that U.S. President Barack Obama learned about the NSA operation targeting Merkel from agency chief Gen.

Keith Alexander in 2010 and allowed it to continue — a claim the NSA denied. “Gen. Alexander did not discuss with President Obama in 2010 an alleged foreign intelligence operation involving German Chancellor Merkel, nor has he ever discussed alleged operations involving Chancellor Merkel,” NSA spokeswoman Vanee’ Vines told CNN. German magazine Der Spiegel, meanwhile, reported that Obama told Merkel he would have stopped it from happening, if he had known about it. Such reassurances appear to have done little to quell outrage from German officials over the alleged espionage, which was reported last week by Der Spiegel.

Europe falls out of love with Obama over NSA spying claims The magazine’s report, which cites a secret U.S. intelligence file, claimed Merkel’s phone had been monitored for more than 10 years, stretching back before her current post. It’s the latest in a series of spying allegations that have challenged relations between the two long-time allies. The same database indicated the United States was spying on many others in Berlin’s political district, at least up to the time when Obama visited Berlin this year, Der Spiegel reported. Now Germany is sending a group of senior intelligence officials to Washington to discuss the reports, the government’s press office said last week.

Asked about these claims, U.S. National Security Council spokeswoman Caitlin Hayden said her agency does not “comment publicly on every specific intelligence activity.” “And, as a matter of policy, we have made clear that the United States gathers foreign intelligence of the type gathered by all nations,” said Hayden, echoing comments she and others have made in recent days. Still, it remains to be seen if citizens and leaders in Europe will accept such explanations — and whether recent efforts by the Obama administration to address their concerns will be successful.