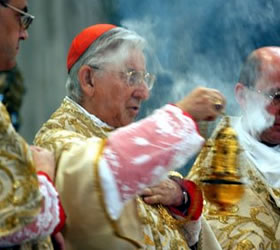 Following the resignation of a bishop after allegations of abuse dating back to the 1980s, a Church-sponsored commission has received hundreds of allegations of sexual abuse at the hands of Belgian priests.

The head of the Roman Catholic Church in Belgium has pleaded for time to punish abusers after a report – commissioned by the church – revealed widespread abuse at the hands of clergy over decades.

Monday’s call by Archbishop Andre-Mutien Leonard came after a report, published on Friday, detailing hundreds of harrowing accounts of sexual abuse and molestation at the hands of priests and church workers in Belgium.
Archbishop Leonard said “a feeling of anger and powerlessness” had taken hold of the church: “The report and the suffering it contains makes us shiver.

“We want to learn the lessons of the errors of the past. The reflections and conclusions contained in the report will be taken on board,” he said.

The damning report was published by the Commission on Church-related Sexual Abuse Complaints, set up by the Catholic Church and headed by independent child psychiatrist Peter Adriaenssens.

The commission investigated 475 complaints between January and June this year, most of which centre on alleged abuse during the 1960s and 1970s.

Archbishop Leonard on Monday called on guilty priests and church workers to confess, saying past pleas to come forward had “not really been heard”.

He added that Belgium’s Church would create a centre for “recognition, reconciliation and healing” – but that given the scale of the challenge, it would not be ready before late December.

Belgium’s Roman Catholic community is still reeling after the resignation in April of Bruges Bishop Roger Vangheluwe, who admitted that he sexually abused a nephew.

Vangheluwe was the first Belgian bishop to resign in April after admitting to sexually abusing his nephew between 1973 and 1986.

Since then, the Belgian Church received hundreds of complaints, leading to the creation of the commission and Friday’s report. – France24