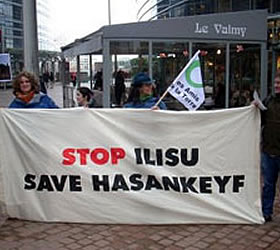 HASANKEYF – In Turkey’s Kurdish heartland in the southeast of the country, locals of a small town face a bleak future. Hasankeyf, with a population of about 3,000 people on the banks of the River Tigris, is to be relegated to being a historical record when the Ilisu dam is built downstream in the coming years – it will submerge the entire town under a lake of water.

Hasankeyf is close to both the Syrian and Iraqi borders, a 45-minute drive from the nearest major Turkish city of Batman. According to local reports, three million people visited the area in 2008, attracted by its numerous sites, including the tomb of Iman Abdullah, said to be a close relative of the Prophet Mohammad.

Hasankeyf contains an ancient bazaar and castle, cave dwellings and 1,000-year-old churches and mosques. Anything from nine to 20 civilizations have come and gone through Hasankeyf, evidenced by the dozens of caves on both sides of the Tigris.

A wealth of archaeological material has been keeping researchers from universities around the country busy for several years as they seek to uncover the town’s history before it is washed away. Around 55,000 people along the Tigris are expected to be affected by the Ilisu hydroelectric dam.

Today, the Tigris flows calmly through the northern side of Hasankeyf, where children catch fish and goats drink from the river’s edge.

On the banks of the river four young boys have constructed a pool where dozens of small trout swarm. While two boys go out fishing with a small net, the others sell the fresh fish in plastic bags to locals preparing for Iftar, the evening meal when Muslims break their fast during the Islamic month of Ramadan.

“Money, money, money. Smoke, smoke, give me,” the boys cackle. “Fish, fish, fish!!” When the dam is constructed, this way of life, undoubtedly thousands of years old, will be ended.

“Syriacs and Arab Christians were originally living in the caves along the river but many left for France, Germany and Switzerland in the 1980s because of the violence between the army and fighters that started here,” said local guide, Osman Batihan.

“When people came here 40 or 50 years ago, they were told by the authorities they would have electricity and running water, this never happened. They ended up living in the holes in the rock and in the castle,” said Batihan, who, like most people in the town, is bitter towards the government.

Hundreds of Christians have, however, returned to the towns of Medyat and Mersin further south, raising 600,000 Turkish lira (US$399,000) to refurbish the Syriac Orthodox churches of Mor Esayo and Mor Kuryakus in Medyat.

People forced to move
Hasankeyf is not listed on the United Nations Educational, Scientific and Cultural Organization (UNESCO’s) list for protected sites in Turkey because the government has not requested its presence as culturally important. Yet a site, area or building must meet only one of the 10 criteria of UNESCO’s World Heritage List. Hasankeyf, it is reported, meets nine of the 10 elements, illustrating its clear and unique importance to both local and international culture.

Outside interest covers more than archaelogy and the pros and cons of the threatening dam. “People representing an American oil company were here a few weeks ago to see about the possibility of drilling for oil in the hills to the north of the town,” said Batihan.

Initial construction work on “New Hasankeyf”, the proposed relocation site for the town’s residents, can be seen from a bridge that spans the Tigris at the foothills of the Raman Mountain. Locals are expected to move to this new settlement, and while many residents look up at the machinery digging out land and grimace, being able to see the construction of the new town from basically any advantage point in the old one seems to have strengthened the locals’ resolve to accept their collective fate quietly.

Although Ramadan is usually a quiet time for business in the town, the number of foreign tourists visiting is down on previous months and years, and the outlook is not positive, says one businessman. “When they read in newspapers or see on television that the town is about to be covered in water, foreigners will not come,” said Fikret Altug the owner of the Hasankeyf Motel located on the banks of the Tigris.

“No tourists come through here since they shut the castle about a month ago,” said Osman. “I have no business now, and the restaurants on the banks of the river are empty because the main attraction for tourists – the castle – is closed.”

Rights groups preparing to fight
The Ilisu dam, 75 kilometers downriver in Kartalkaya, is expected to be operational within two to three years and throughout its construction will employ around 800,000 people at a cost of around US$1.52 billion. When finished, it will be a source of 1,200 megawatts of electricity and will form part of a wider project involving 20 other dams.

Though initially designed 57 years ago, demand for a local source of power in recent times prompted Prime Minister Recep Tayyip Erdogan to revive the idea as part of government attempts to develop the country’s southeast region.

In 2007, the Austrian, Swiss and German governments had agreed to support export credit agencies to finance the building of the dam in Ilisu but pulled out following pressure from international human rights and environmental groups in July of last year. Since then, the Turkish government has managed to source two Turkish banks, Garanti and AK Bank, to provide capital for the dam’s construction.

According to one Turkish newspaper, the dam project has been exempt from the preparation of an environmental impact report while other reports say a number of non-governmental organizations were denied access to the official documents about the dam project.

Both Turkish and international rights groups, including Photographers without Borders, have called for the government to back down on the project and several campaigns are under way to raise awareness about the future of Hasankeyf.

For locals, few are positive about the future of their livelihoods or about their town. “We will probably move west, to a city in western Turkey,” said Altug. “As you can see, there is nothing for us here.” -atimes