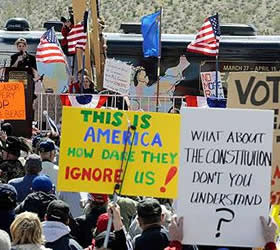 With the smug incomprehension in which it takes so much pride (can’t understand – won’t understand!), the BBC sets about the American Tea Party Movement as if it were a cross between the Klu Klux Klan and the German neo-fascist brigade. Not once in all the demonic depictions I have seen and heard (last week’s Newsnight package was particularly outrageous) have I heard a mention of what the TPM is actually about: taxation. (Note to BBC editors: the movement is named after the Boston Tea Party because it is protesting about the imposition of higher federal taxes and over-weening controls on citizens who believe their voices have been ignored.)

The British generally and the BBC in particular have a real problem understanding the obsessive suspicion in which the power of central government is held in the US. This is not some funny redneck eccentricity: it is fundamental to the Constitution which gives individual states much greater sovereignty than the countries of the European Union enjoy. The states have independent judicial systems (some states have capital punishment, others do not) and separate taxation systems (some have sales taxes, others do not). Only a Supreme Court ruling can over-turn state law by, for example, declaring something (such as abortion) to be a legal right which a state legislature may not deny.

Traditionally there is only one nationally imposed tax – federal income tax – which is designed to pay for those functions that must be carried out by national government. Resistance to the Obama healthcare reforms is as passionate as it is precisely because it imposes a federal requirement to purchase health insurance which seems to contravene the basic economic freedom guaranteed by the Constitution. The BBC obviously finds it impossible to believe that ordinary people could actually take issues like this seriously. (They can only be racists or hillibilly know-nothings.) The Corporation  really ought to encourage its correspondents to get out more and talk to some of the articulate Americans who don’t spend their lives in liberal salons. -telegraph