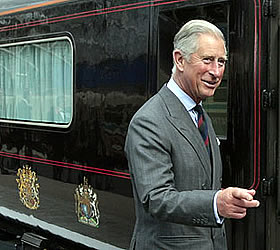 As a mode of transport, the royal train suits Prince Charles down to his hand-made brogues: resolutely old-fashioned, rather costly for the taxpayer, but just possibly ahead of its time.

The locomotive this afternoon hauled the prince out of Glasgow station, furnished with the prince’s bespoke study, a grand dining room and bedroom suite, complete with bath and his and hers beds, on the start of a four-day tour of Britain that will cost the taxpayer at least £50,000.

The contrast between the train’s opulence, which seemed worthy of an oligarch, and the purpose of its journey was, to some, jarring. Charles has begun a week-long trip to persuade his “subjects” to go green, and the train from which he has chosen to assert his voice in the climate debate has been converted to run on cooking fat, which, its suppliers estimate, creates just one-eighth of the carbon dioxide of oil-based diesel.

Until Friday the prince will criss-cross Scotland, England and Wales to “extol the virtues of a sustainability revolution”, preaching the benefits of towelling nappies, cycling, and European city breaks by train. The “Start” campaign, as he is badging the initiative, “doesn’t lecture or hector anyone, nor does it attempt to frighten”, he insisted today. To run the campaign, which could cost £2m a year, he has hired a leading marketing executive from B&Q, Jo Kenrick, and signed up major sponsors including Asda, BT and EDF.

“What I hope to get across to as many people as possible is that, however awful the predicament we face with climate change and the unsustainable use of resources that keep us all alive, we aren’t going to get anywhere by telling everyone they need to stop doing things,” he said on the platform. “There has been quite enough of that in recent years.”

But even before his train set off to the sound of a lone piper, the prince was facing perhaps inevitable accusations of double standards for using lavish transport – eight carriages for a core party of just 14 people – to preach a message of sustainability.

“I’m not sure he’ll get that many people jumping on his bandwagon,” said Nicky Coles, 38, a child carer who watched Charles roll up to the launch in a motorcade of petrol-guzzling cars. “He’s a royal. He has the money to go green while Joe Bloggs hasn’t. He can get his gardener to grow organic vegetables while the rest of us go to the supermarket and pay more.”

It was also noted that his itinerary hardly minimises emissions, which Clarence House has yet to estimate. Tonight the train takesthe prince from Edinburgh to west Wales and will tomorrow chug back up to Newcastle upon Tyne so he can visit a local food market, before dropping south towards London again.

Sir Stuart Rose, the chairman of campaign sponsor Marks & Spencer, accepted a pair of the prince’s old green cords as part of the store’s recycling initiative and defended Charles’s role as “a great convener”. “For 25 years, the guy has been banging away at the importance of sustainability and he has been mostly proved right,” Rose told the Guardian. “He has realised that the way to do it now is to get it done through the vox populi.”

But campaigners for an elected head of state claimed the tour was a “political roadshow” and represented a breach of Charles’s constitutional role. Graham Smith, director of Republic, said: “What he is doing is conducting his own political roadshow at taxpayers’ expense. He is crossing the line between being heir to the throne and being a political activist and there needs to be a parliamentary inquiry into his use of public funds.”

When he announced Start, Charles said he imagined it as like the Great Exhibition of 1851 – a display of world-changing technology. Today, he visited a craft stall offering wine bottles melted down into cheese boards and sat on a foldaway bike. He did not appear overly keen to talk about going green with the public; instead he greeted a line of Glaswegians with smalltalk.

“Are you going somewhere or have you been?”

But supporters insisted that while Charles has had success gathering world leaders and business leaders to make his voice heard on climate change, Start will open a new front with the general public. “He has access to heads of state, but like everybody else he has realised a big part of this challenge is about popular culture,” said Tony Juniper, his environment adviser. “To achieve change you need [a] culture change and public backing. In the past, his message has been mediated by the media. Through Start, he is able to articulate a clearer message and for it to come across in a more coherent way.”

To help, TV celebrities including Alan Titchmarsh, Rory Bremner and Antony Worrall-Thompson have been enlisted to enliven a 10-day festival of sustainability in the gardens of Clarence House, Lancaster House and Marlborough House which starts on Wednesday. Rolf Harris will perform, some lucky visitors will get to make bags out of Charles’ old curtains while others can “admire a display of eco cars”. Later this autumn, Harmony, a book written by the prince, will set out his vision for the environment, as will a TV documentary of the same name, made with NBC.

In it he declares that he may, at last, have found his role: “I can only somehow imagine that I find myself being born into this position for a purpose.” -guardian