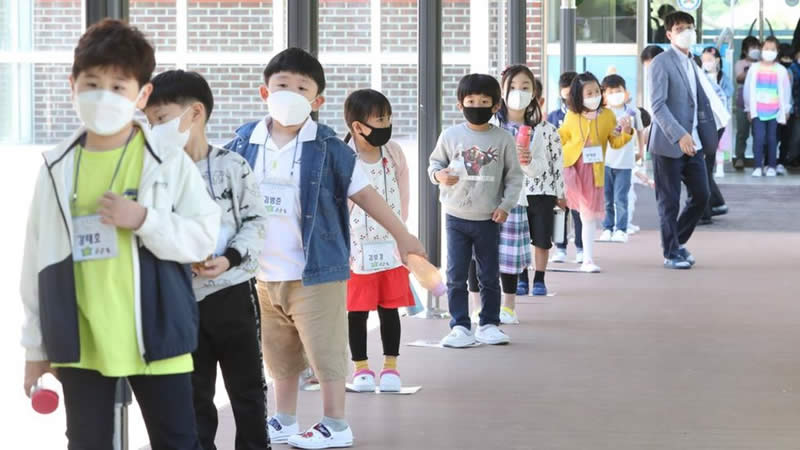 South Korea has ordered the closure of all schools and kindergartens in the greater Seoul area following a rise in coronavirus cases there.

Nearly 200 staff and students have been infected in the greater Seoul area over the past two weeks.

Remote learning will continue until 11 September, the Ministry of Education said.

Health authorities have warned that the country is on the brink of a nationwide outbreak.

All students in the greater Seoul area, home to over 25 million people, will now take classes online with the exception of those in their final year of high school who are due to take university entrance examinations in December.

Schools with fewer than 60 students and special education schools are allowed to choose whether to follow the ministry’s guidelines, the Korea Times said.

Most of South Korea’s schools reopened in stages between 20 May and 1 June after cases in the country appeared to fall.

South Korea has reported 310 deaths and 17,945 cases since the pandemic began, according to data from Johns Hopkins University.

The country had been viewed as one of the world’s coronavirus success stories for its management of the disease – however in recent weeks infections in the country, particularly the greater Seoul area, have increased.

On Tuesday, 280 new Covid-19 cases were reported – the 12th day of triple digit increases in a country used to case numbers below 30.

Many of the new infection clusters are linked to a number of right-wing Protestant churches whose members took part in a mass rally in Seoul just over a week ago.

Authorities in Seoul have ordered masks to be worn in indoor and outdoor public places for the first time. Churches, nightclubs and karaoke bars have also closed.

The government has warned that if cases continue to rise, tougher social distancing rules could be enforced. It could mean that many businesses across the country would have to close for the first time during the pandemic.