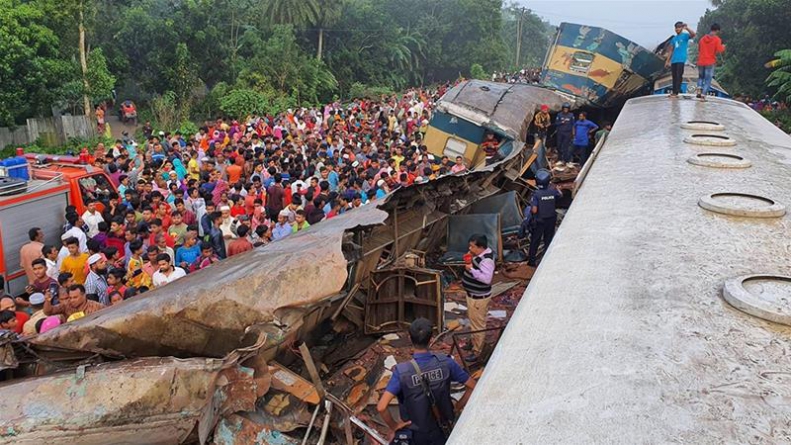 At least 15 people were killed and 58 others injured when two trains collided in Brahmanbaria district in eastern Bangladesh early on Tuesday, police said. Three coaches were sent tumbling off the tracks at Mondolbhag station in the town of Kasba when a Dhaka-bound intercity train and a locomotive bound for Chittagong collided.

“At least 15 people have been killed. And another 58 were injured. We have sent the injured to different hospitals in the region,” district police chief Anisur Rahman told AFP news agency. Rahman told Anadolu Agency that the death toll might rise as some passengers were still reportedly trapped under the affected coaches.

Train services between the capital Dhaka and two other important cities – Sylhet and Chittagong – have been suspended. The circumstances surrounding the accident were under investigation, a railway official told reporters. “We are still conducting a rescue operation,” he said, adding that faulty signalling could have been to blame.

Bangladesh President Abdul Hamid and Prime Minister Sheikh Hasina expressed their condolences over the deaths. Train accidents are common in Bangladesh and are often caused by poor signalling or other rundown infrastructure.