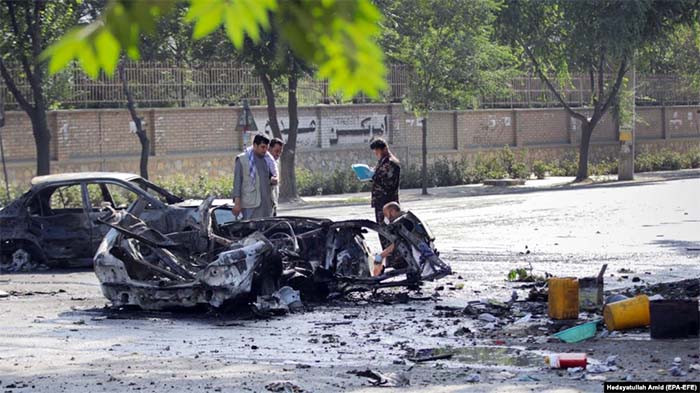 Afghanistan’s Health Ministry says at least eight people have been killed when an explosion struck near the entrance to Kabul University. Dr. Wahidullah Mayar, a ministry spokesman, said on July 19 that 33 people had also been wounded and taken to hospital. There was no immediate claim of responsibility and it was not clear if the attack was carried out by a suicide bomber or remotely detonated.

Ferdous Faramarz, a spokesman for the Kabul police chief, said two vehicles caught fire after the blast. Faramarz said police defused a second bomb that was placed close to the explosion site. The explosion occurred as students were waiting outside the university to attend exams. The blast came after at least 12 people were killed and almost 90 wounded on July 18 when Taliban militants detonated two car bombs at a gate outside police headquarters in the southern city of Kandahar. After the car bombs, Taliban gunmen opened fire from nearby positions, triggering a battle with security forces, said Tadeen Khan, the city’s police chief.

The attackers targeted the counternarcotics wing of the police, Khan said.Baheer Ahmadi, the spokesman for the Kandahar provincial governor, said 12 people had been killed, including nine civilians and three police officers. Another 89 were wounded, he added. Taliban spokesman Zabihullah Mujahid told RFE/RL that Taliban militants had carried out the attack. Afghan security forces across the country have been coming under nearly daily attacks by the Taliban.

The increase in violence comes despite reported progress in efforts by the United States to broker an end to Afghanistan’s nearly 18-year war. The U.S. peace envoy for Afghanistan, Zalmay Khalilzad, has held eight rounds of peace talks with the Taliban in Qatar. He described the latest round that ended on July 9 as the “most productive” ever. Taliban negotiators also reported good progress at the talks, but the deadly violence has continued as Kabul’s Western-backed government struggles to fend off attacks across the country by Taliban fighters, Islamic State extremists, and other militant groups.