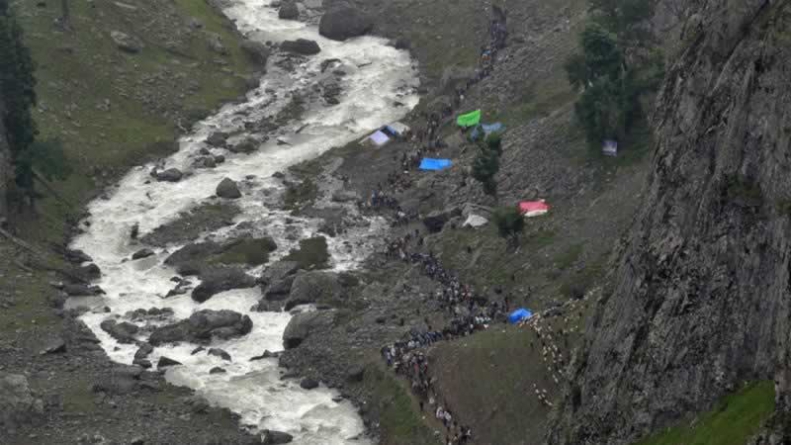 At least seven Hindu pilgrims, most of them women, have been killed in a gun battle that erupted in Indian-administrated Kashmir after suspected rebel fighters attacked a police vehicle, officials said.

The bus carrying more than 50 pilgrims came under attack on Monday evening as they were returning from a cave shrine in the Himalayas, police said. Fourteen others were wounded when the vehicle got caught up in the cross fire near the southern Anantnag town, police officers speaking to news agencies on condition to anonymity said.

There was no immediate claim of responsibility for the attack. The gunmen first attacked an armoured police vehicle, and the officers in the vehicle returned fire, a police statement said. Thereafter, the militants again fired at a police patrol in which a passenger bus was hit by bullets,” the statement said.

India’s Prime Minister Narendra Modi condemned the attack and tweeted that “India will never get bogged down by such cowardly attacks and the evil designs of hate”. He also said his thoughts were with all those who lost loved ones in the attack. My prayers with the injured,” he tweeted.

Three top separatist leaders, who challenge India’s sovereignty over Kashmir, strongly condemned the attack and expressed “deep sorrow and grief over the killings”. This incident goes against the very grain of Kashmiri ethos,” Syed Ali Geelani, Mirwaiz Umar Farooq and Mohammed Yasin Malik said in a joint statement in Srinagar, the main city of the Indian portion of Kashmir.

The pilgrims were returning after paying obeisance at the shrine nestled in the Himalayas at a height of 4,115 metres when the attack occurred. About 100,000 pilgrims have already completed the journey to the Amarnath shrine that began late last month and is due to end in late August under tight security.

In the past, the pilgrimage has been targeted by Muslim rebels who have been fighting for Kashmir’s independence from India or its merger with neighbouring Pakistan since 1989. India accuses Pakistan of arming and training the fighters, a charge Islamabad denies. Kashmir is divided between India and Pakistan by a ceasefire line, and the two countries have fought two wars over its control since they won independence from British colonialists in 1947.