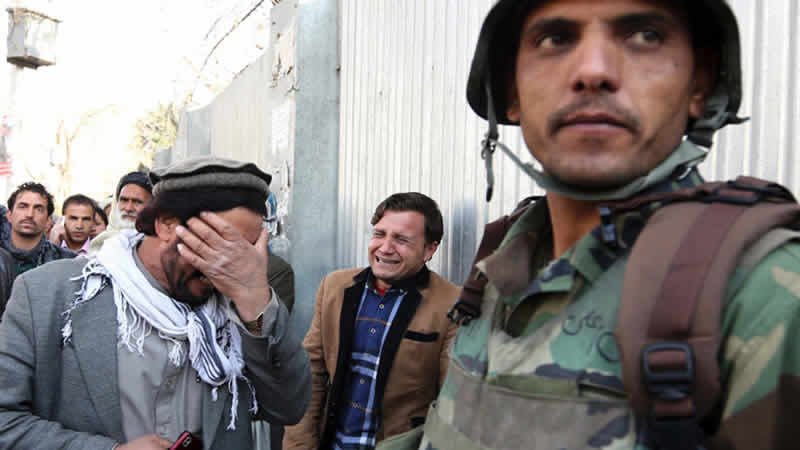 Gunmen disguised as doctors stormed Afghanistan’s largest military hospital on Wednesday, killing at least 38 people in a six-hour attack claimed by the Islamic State group as it makes inroads into the war-battered country.

More than 70 others were wounded in the assault on the Sardar Daud Khan Hospital, with explosions and gunfire rattling Kabul’s diplomatic district as dense clouds of smoke rose in the sky. Medical staff hunkered down in the hospital wards posted desperate messages for help on the social media, with television footage showing some of them trapped on the ledge of a top-floor window. Attackers are inside the hospital. Pray for us,” a hospital staff member wrote on Facebook.

Hospital administrators told AFP three gunmen wearing white laboratory coats began spraying bullets after a suicide bomber on foot blew himself up at the backdoor entrance, sparking chaos inside the 400-bed facility. “I saw one of the attackers, armed with an AK-47 and dressed as a doctor, shooting at patients and guards on the third floor,” hospital nurse Abdul Qadeer told AFP. They shot my friend but I managed to flee… I had to jump over the barbed wire to escape.” At least two other loud explosions – including what the Defence Ministry called a car bomb in the hospital’s parking lot – were heard as Afghan special forces launched a clearance operation that lasted around six hours.

The attackers were gunned down after special forces landed on the roof of the hospital in a military helicopter. The attack in the capital’s central Wazir Akbar Khan neighbourhood has killed 38 people and wounded more than 70,” the Italian-run emergency hospital said in a statement, adding that a seven-year-old boy was among those seriously injured. The raid highlights how Afghanistan’s warring parties, including government forces, have repeatedly targeted medical facilities, decimating the country’s fragile health system and preventing conflict-displaced civilians from accessing life-saving care.

Why Are Golfers Skipping The Arnold Palmer Invitational?