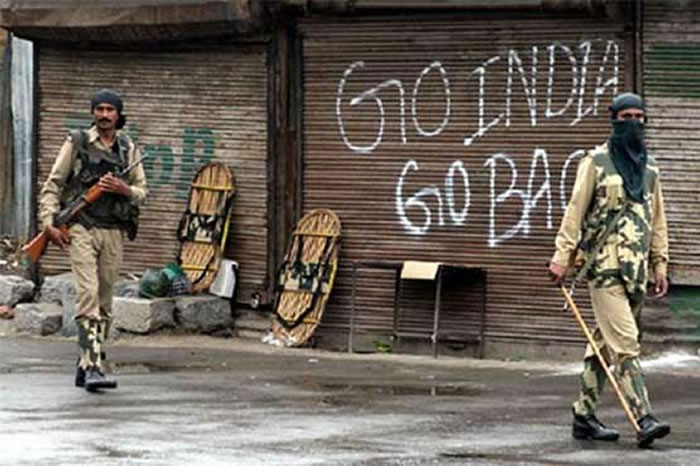 Atleast two Kashmiri youths were martyred by the Indian troops in their fresh act of state terrorism in Baramulla district as India s independence day is being observed as Black Day in the valley.

Kashmiris on both sides of the Line of Control and across the globe are observing the Indian Independence Day as Black Day to convey the message to the international community that India had usurped their inalienable right to self-determination.

The day is being marked by a complete strike in occupied Kashmir. Protest rallies and functions are being held in the territory and in the world capitals to highlight different dimensions of the Kashmir dispute and Indian atrocities on innocent Kashmiris. A march led by Jamaat-e-Islami Azad Kashmir President, Abdur Rashid Turabi will also be held from Muzaffarabad to Chikothi to express solidarity with the oppressed people of Kashmir. On the contrary, Kashmiris flouting curfew and other restrictions celebrated Pakistan’s Independence Day, a day before, with great enthusiasm by staging forceful pro-Pakistan rallies and demonstrations and hoisting Pakistani flags in every nook and corner of the territory. Indian Army, police and paramilitary personnel were deployed in strength in Srinagar and all other districts and towns of the territory to enforce restrictions for the 37th consecutive day, today.

However, thousands of people defied curfew and took to the streets in Kulgam, Islamabad, Pulwama, Bandipora and other districts and raised high-pitched pro-freedom and pro-Pakistan slogans. Pakistani national flag was hoisted at many places, on telecommunication towers and buildings across the territory. Pakistan’s national anthem was also played to commemorate the day. Meanwhile, dozens of women including the Chairperson of Dukhtaran-e-Millat Aasiya Andrabi, were injured when Indian armed forces fired teargas shells to quell a women march in south Kashmir’s Tral town.

Aasiya Andrabi had managed to reach Tral to lead the rally. In another incident, at least a dozen of people were injured in Malangpora area of Pulwama district after armed forces used force on participants of the rally. These rallies were a part of Referendum March, call for which was jointly given by the Hurriyet leadership. The authorities did not allow the Chairman of All Parties Hurriyet Conference, Syed Ali Gilani and Mirwaiz Umar Farooq to lead referendum march towards Lal Chowk, on Sunday.

The two leaders staged sit-in outside their residences in Srinagar. Their supporters were carrying banners reading “Go India Go Back.” Later, the authorities arrested Mirwaiz Umar Farooq and lodged him at Nigeen Police Station. On the other hand, India dismissed Pakistan’s offer to supply goods items to the people of occupied Kashmir as curfew and curbs continue to persist on 38th consecutive day. Spokesperson of the Ministry of External Affairs of India Vikas Swarup said that talks on other subjects will be made with Pakistan before discussing the Kashmir issue. Kashmir is divided between archrivals India and Pakistan, which have fought two wars over control of the region since British colonialists left the subcontinent in 1947. Most people in the Indian-controlled part resent the presence of hundreds of thousands of Indian troops and support the freedom cause. More than 68,000 people have been killed in the armed uprising against Indian rule and the subsequent Indian military crackdown.