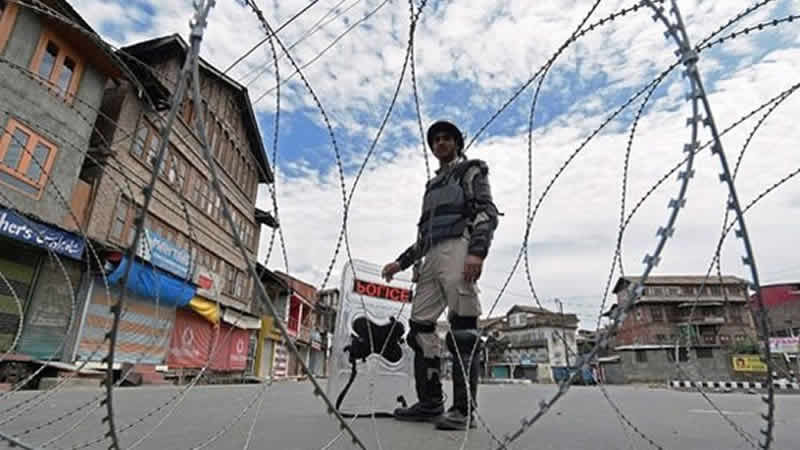 Tensions continue to persist in India-held Kashmir as the authorities continued curfew and other restrictions across the valley for the 31st consecutive day on Tuesday.

A teenage boy succumbed to his injures a day before bringing the death toll to 70.

The boy identified as Amir Lone was injured after being hit by pellets from a very close range on 29 July and was being treated at Soura Institute of Medical Sciences in Srinagar. Doctors had said that the pellets had badly damaged the brain of the boy. Meanwhile people defied restrictions in many areas and came out of their houses and staged protests against the ongoing killing spree in the territory. Around a dozen civilians, including two women, were critically injured after armed forces’ personnel fired pellets on a protest demonstration in Bijbehara area of Islamabad district. Reports said that Indian police had arrested at least 1300 youth from various parts of Kashmir in the past one month while frequent raids by police have become order of the day in the territory.

The police raids have forced hundreds of youth to go into hiding while people across Kashmir remain awake during nights to foil arrests. Almost entire Hurriyet leadership including the Chairman of All Parties Hurriyet Conference, Syed Ali Gilani, Mirwaiz Umar Farooq and Muhammad Yasin Malik continued to remain under illegal detention either in jails or under house arrest. An Indian army vehicle deliberately hit a car, killing a civilian on spot in Sumbal. The killing led to forceful anti-India demonstrations in the area. On the other hand, three Indian army men including an officer were killed and five injured in an encounter in Macchil area of Kupwara district on Monday.

A youth was also killed during a military operation in the area. Many people were injured in different localities of the territory by the Indian forces’ personnel. Since 1989 several rebel groups have been fighting Indian forces deployed in the Kashmir region, seeking either independence or a merger of the territory with neighbouring Pakistan. The fighting has left tens of thousands, mostly civilians, dead. Kashmir has been divided between rivals India and Pakistan since they won independence from Britain in 1947. Both claim the Himalayan territory in full. Overall violence in the restive territory has sharply declined during the last decade, but armed clashes between rebels and government forces still break out regularly.