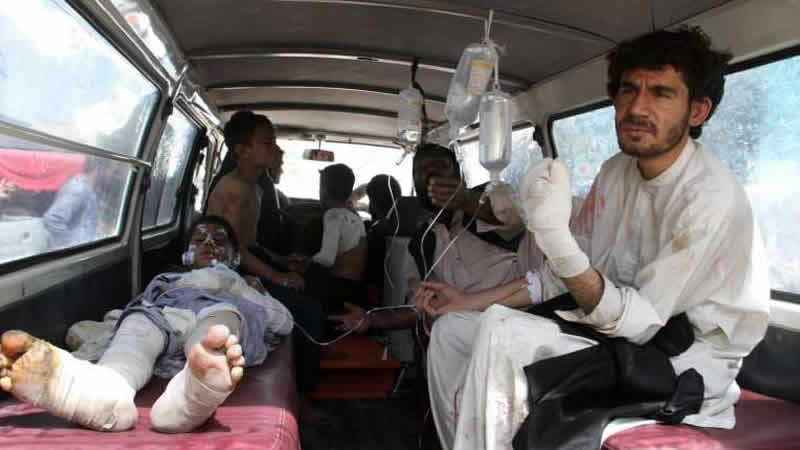 At least 73 people were killed on Sunday when two passenger buses and an oil tanker burst into flames in a head-on collision in eastern Afghanistan, health officials said, in one of the worst road accidents in the war-battered nation.

Many of the dead, including women and children, were burned beyond recognition and dozens of others were left badly injured in the accident in Ghazni province, near the Afghan capital, one of the areas worst affected by the Taliban insurgency. The vehicles were completely gutted and clouds of acrid smoke shrouded the scene of the crash on the Kabul-Kandahar highway, a major roadway linking Afghanistan’s two largest cities. “The death toll has soared to 73,” ministry spokesman Ismail Kawoosi told AFP, warning that the toll was expected to rise still further. Most of them are completely burned. “Kawoosi gave a sharply higher toll than other officials.

Ghazni’s Governor Mohammad Aman Hamimi earlier reported seven fatalities but his own spokesman gave a death toll of 50. Bloodied, dazed and badly burned, many of the survivors streamed into Ghazni’s main provincial hospital, while many others were rushed in ambulances to health facilities in southern Kandahar city. The Kabul-Kandahar highway passes through militancy prone areas and many bus drivers are known to drive recklessly at top speeds so as not to get caught in insurgent activity. Our driver was at fault  he was driving too rashly,” said Esmatullah, one of the few lucky passengers who survived Sunday’s crash with minor injuries.

Most bus drivers on the highways are known to smoke hashish, opium and other drugs. They are completely out of control. “Afghanistan has some of the world’s most dangerous roads, often in dilapidated condition and traffic rules are seldom enforced. Many in the country rely on old and rickety passenger vehicles, meaning that high casualty road traffic accidents are common. At least 18 people were killed in May last year when a minivan overturned in the western province of Badghis.

And in April 2013 a bus hit a wrecked fuel tanker in the southern province of Kandahar, killing 45 people. The World Bank in November signed off a $250 million grant to upgrade roads crossing Afghanistan’s Hindu Kush mountains, crucial trade links that are often closed in winter by snow. Insecurity is growing around Afghanistan as the Taliban press on with their 15-year insurgency against the Western-backed Kabul government.