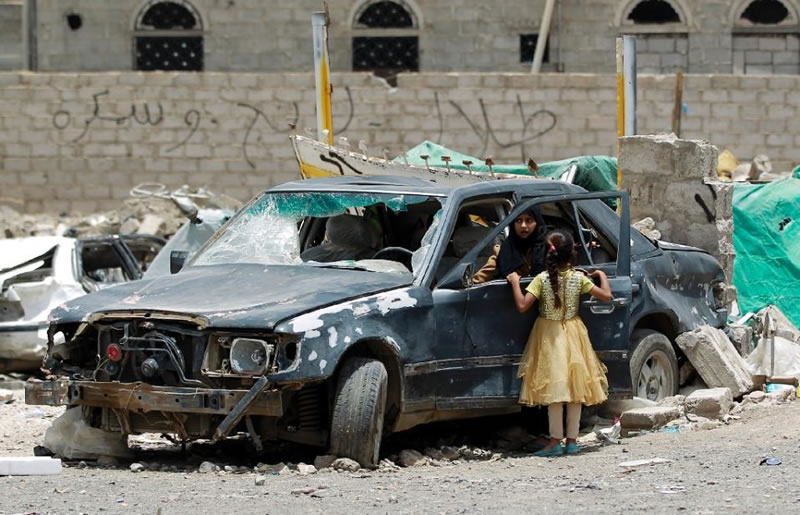 The United Nations announced Wednesday a date for its conference on Yemen, where Saudi-led warplanes have intensified raids against rebels in a conflict that has displaced half a million people.

But Yemen’s government-in-exile swiftly demanded a pullback of the Iran-backed Shiite rebels from seized territory as a precondition to joining the talks set for May 28 in Geneva.

The developments came as Tehran headed off a potential confrontation with arch-foe Washington by saying an Iranian ship bound for Yemen in defiance of a blockade would now dock in Djibouti for UN inspection. The Saudi-led coalition has waged an air campaign against the Huthi rebels since March 26 in an effort to restore the authority of exiled President Abedrabbo Mansour Hadi, who fled to Riyadh. UN Secretary-General Ban Ki-Moon said next week’s conference was aimed at restoring “momentum towards a Yemeni-led political transition process”.

Ban hoped the Geneva talks would “help Yemen re-launch the political process, reduce the levels of violence and alleviate the intolerable humanitarian situation,” said a statement. The conference had been due to be announced last week, but the UN demanded a halt to fighting as a precondition. “We are not going unless there is something on the ground,” Yemen’s Foreign Minister Riyadh Yassin told AFP after the UN announcement, saying Hadi’s government had yet to receive an official invitation. But even if it was invited, Yassin said the government would not attend without some implementation of UN Security Council Resolution 2216 as a sign of “goodwill”.

The April resolution imposed an arms embargo on the rebels and demanded they relinquish territory they seized since descending from their stronghold in the mountains of northern Yemen last year. “We will not attend if there is no implementation, at least part of it. If there is no withdrawal from Aden at least, or Taez,” said Yassin. After a five-day humanitarian ceasefire expired at the weekend, the Arab coalition resumed bombing several cities including Sanaa, accusing the rebels of having violated the truce. The latest strikes on the capital overnight were “the most violent since the start of the bombing” campaign, said Old City resident Saleh Moqbel.

Civilians fled when powerful blasts went off as warplanes targeted for a second straight night arms depots on hills overlooking the city. “Some of these families were hosted by relatives, while others were forced to rent shelters, including garages, to spend the night,” said Hasan al-Amudi, who lives in Sanaa’s downtown area. In the central province of Ibb, witnesses reported seven coalition air strikes, mostly targeting a pro-rebel army camp. Other strikes targeted the northern rebel stronghold of Amran province and Abyan province in the south. The Huthi rebels have allied with troops loyal to former president Ali Abdullah Saleh and have been locked in deadly clashes with pro-Hadi fighters across Yemen.

Iran, a key ally of the Huthis, has demanded an end to the Saudi-led bombing. The conflict has caused humanitarian chaos, with the UN saying more than half a million people have been displaced. The Iranian aid ship bound for Yemen in defiance of US warnings had entered the Gulf of Aden and had been expected to reach Hodeida port on Thursday before Tehran heeded calls to allow UN inspections. The aid “will be inspected in Djibouti. The ship will dock in Djibouti and the protocol laid down by the United Nations will be implemented,” said Deputy Foreign Minister Hossein Amir-Abdollahian. The vessel, renamed Nejat (Rescue), is said to be carrying 2,500 tonnes of aid including food, water and medical supplies, all urgently needed in the conflict-wracked and impoverished state. Its passengers include doctors, anti-war activists from the United States, France and Germany, and journalists, according to Tasnim, a news agency associated with Iran’s elite Revolutionary Guards. Citing Yemen’s health services, the UN said that as of May 15, some 1,850 people had been killed and 7,394 wounded in the violence in Yemen. Another 545,000 had been displaced. The UN refugee agency said its assessments on the ground during the ceasefire had “exposed enormous difficulties for thousands of civilians displaced by conflict”. – AFP