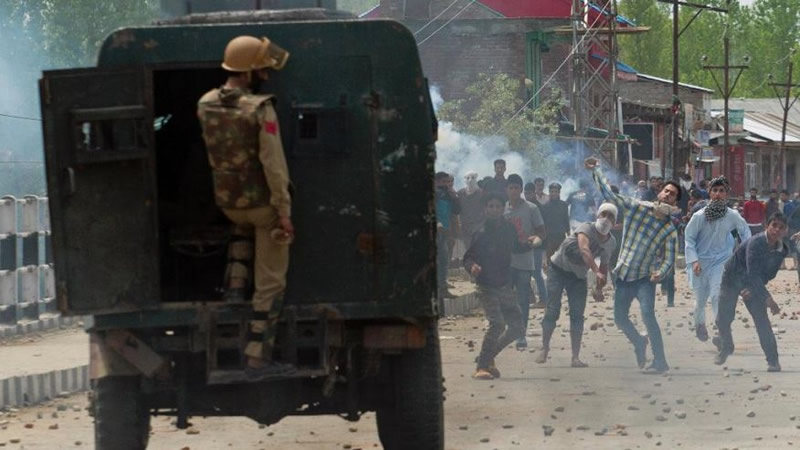 Two Indian policemen have been arrested in the killing of a teenage boy during weekend protestsin the disputed region of Kashmir, police said.

Streets in the main city of Srinagar were tense, with armed police and paramilitary soldiers inspecting vehicles and questioning people. Police said in a statement that they arrested two policemen after a preliminary investigation revealed one had ordered the other to fire his rifle at stone-throwing protesters in the northwestern village of Narbal on Saturday “in violation of laid down SOP (standard operating procedure).” Locals and rights groups have long said, however, that such investigations rarely yield results and are aimed only at calming public anger. Relatives and witnesses have contested the official story of the boy s death, saying he had been picked up by authorities and was shot on the side of the road while in custody. On Saturday night, protesters held a torch-lighting ceremony in Srinagar in the boy s memory.

Indian authorities have been struggling to contain growing anger after Friday s arrest of separatist leader Masarat Alam on charges of leading protests against India s rule in the region, just weeks after his release from five years in prison on the same charge. Kashmir is divided between neighboring India and Pakistan, and most people within the predominantly Muslim region mistrust Indian rule. Since an insurgency erupted in 1989, several militant groups in Kashmir have demanded the region be given full independence or merged with Pakistan. An estimated 68,000 people have died in the fighting and ensuing crackdown by Indian forces. With the insurgency largely suppressed, anti-India sentiment is now expressed mostly through street demonstrations.