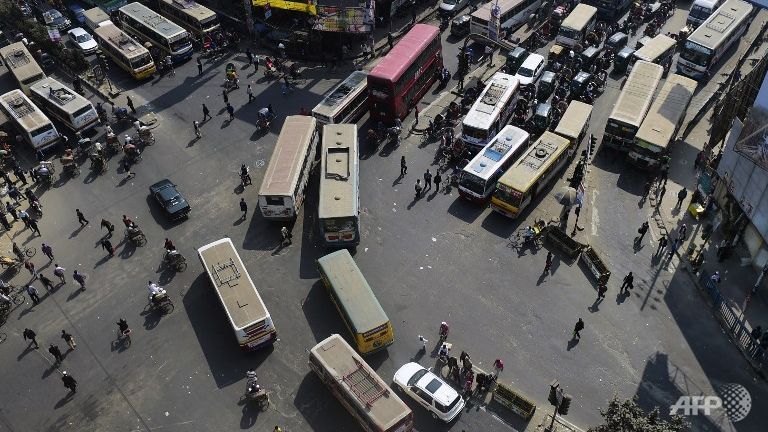 Police said the bus was attacked near the eastern town of Chuddogram. The deaths brought the number of people killed in protests unleashed by opposition leader Khaleda Zia last month to 53, with hundreds more injured — most in firebombings of buses, lorries and cars. “Seven passengers were burnt to death in the bus after the petrol bomb was thrown at 4am (2000 GMT Monday),” district police chief Tuttul Chakrabarty told AFP by phone. “Five of the passengers are fighting for their life as 40-80 percent of their bodies were burnt. They have been shifted to a hospital in the capital,” he said. At least 10 people were also injured after they jumped from the bus’s windows, trying to escape the blaze, he added.

Police Inspector Mahfuzur Rahman told AFP that authorities have raided villages near where the attack took place, but no arrests have been made. Zia urged supporters last month to enforce a nationwide blockade of roads, railways and waterways to try to force Prime Minister Sheikh Hasina to call a fresh general election. The opposition boycotted the last poll in January 2014 on the grounds it was rigged.  The boycott meant most members of the 300-seat parliament were returned unopposed, handing Hasina another five years in power.  The protests have triggered widespread violence across the impoverished nation. More than 800 vehicles have been torched or damaged, bringing inter-city transport services almost ground to a halt. Security forces have launched a nationwide crackdown — but the arrest of more than 10,000 opposition supporters appears to have done little to quell the unrest.

Zia denies her Bangladesh Nationalist Party (BNP) and its Islamist allies are responsible for the firebombings and has demanded the release of opposition officials and leaders detained over the violence. Hasina has accused Zia of trying to trigger “anarchy” and has reportedly given the the security agencies carte blanche to hunt down the protesters. On Monday Bangladesh authorities increased pressure on Zia with the announcement of a probe into allegations of murder against her. The 69-year-old leader, who has been holed up in her office since January 3, has already been charged by police with lesser crimes including “abetting” and “instigating” the firebombings. The European Union has urged Hasina’s government and the opposition to hold talks to resolve the crisis. – AFP