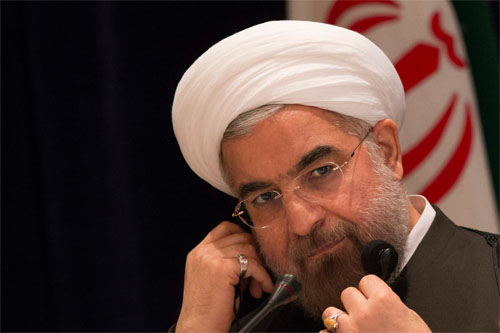 Iranian President Hassan Rouhani said on Monday a nuclear deal with the West was bound to happen and he believed it could be achieved by a November 24 deadline.

“We have reached consensus on generalities and there are only the fine details to be worked out:

Whether we would reach an agreement within the next 40 days, if the time will be extended, etc.,” the president told his people in a late evening address broadcast live on television. “Of course details are important too, but what’s important is that the nuclear issue is irreversible. I think a final settlement can be achieved in these remaining 40 days. We will not return to the situation a year ago. The world is tired and wants it to end, resolved through negotiations,” he said. “A nuclear settlement is certain,” he said, vowing to “apply all our efforts in that direction.” Rouhani, a moderate elected by a landslide 14 months ago partly on promises to end hostilities with the West, cautioned nevertheless that “a 12-year-old dilemma cannot be resolved overnight.” [contentblock id=2 img=adsense.png]

Top diplomats of the United States, Iran and the European Union will meet for another round of talks in Vienna later this week to push for an elusive deal ahead of a Nov. 24 deadline. The United States, France, Germany, China, Russia and Britain, grouped under the P5+1, have already held a series of meetings with Iran to try for a deal that would curb the Islamic republic’s suspected nuclear activities in return for a gradual lifting of economic sanctions against Tehran. The West hopes resolving the nuclear standoff will ease tension and avert a full-scale conflict in the troubled Middle East – with repeated Israeli threats of force to stop its arch- enemy Iran from gaining nuclear weapon technology.

Tehran has denied any such ambitions, insisting that its uranium enrichment program is designed to generate electricity and for scientific research. A U.S. official said last week a deal was likely by the present deadline, but Western diplomats say the two sides remain divided on such key issues as the future scope of Iran’s uranium enrichment, which at high purity could be used to make bombs. -yahoo