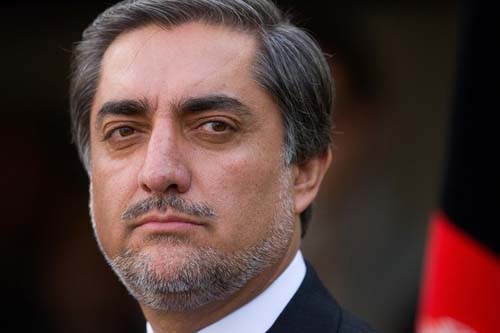 Former foreign minister Abdullah Abdullah is well ahead of his main rival in Afghanistan’s presidential election, officials said Sunday after half of the ballots were counted, though a run-off vote still looks likely next month.

The Independent Election Commission (IEC) announced that Abdullah Abdullah was in the lead with 44.4 percent followed by former World Bank economist Ashraf Ghani with 33.2 percent of the votes counted so far from the April 5 election. If no candidate gains more than 50 percent, a second-round election between the two leading names is tentatively scheduled for May 28. Hundreds of serious fraud allegations are being investigated after the eight-candidate election to succeed Hamid Karzai who has ruled Afghanistan since the Islamist Taliban regime was ousted in 2001. “We knew and believed in ourselves that we would be leading other candidates by a huge margin,” Abdullah Abdullah said after the partial results gave him an 11 percentage-point lead, adding that his campaign had concerns about cheating.

“We have filed our complaints with the Election Complaints Commission,” he said. “We want to assure the people of Afghanistan we will defend and protect their votes.” The 2009 election, when Karzai retained power, was marred by massive fraud in a chaotic process that shook confidence in the multinational effort to develop Afghanistan and also started a sharp decline in relations with the US. Ghani on Saturday also pointed to alleged fraud, in one sign that the final result could be disputed. “There is still vagueness, and the point is that these votes are still changing,” he said after the latest batch of results. “Fraud is not allowed in law at all, and it is not acceptable.”

Ghani would be a serious contender in a head-to-head run-off as he is more favoured by Pashtuns, the country’s largest ethnic group, than Abdullah, who gains much of his support from Tajiks. With 3.45 million votes now counted, the overall turnout is set to be nearly seven million voters from an estimated electorate of 13.5 million — well above the 2009 turnout. “The figures are partial, and the result is changeable,” Ahmad Yousuf Nuristani, the IEC chief, warned, adding that only votes that had cleared fraud tests had been counted. The eventual winner will have to lead the fight against a resilient Taliban insurgency as US-led combat troops leave Afghanistan this year, and must also strengthen an economy that is reliant on declining aid money. A week ago, the first 10 percent of the vote was announced with Abdullah collecting 41.9 percent and Ghani on 37.6 percent.

Both leading candidates have expressed confidence they will win the election in the first round, but they also vowed to fight on if a run-off is necessary. Abdullah Abdullah who came second to Karzai in 2009, has signalled that he may be open to constitutional changes that could allow for a power-sharing deal before the run-off. Ghani has also alluded to possible negotiations, but it is uncertain how any new system could accommodate the two rivals or how long it would take to implement. Karzai, who is constitutionally barred from serving a third term, has dominated Afghanistan’s violent post-Taliban era and is set to play an influential role behind the scenes in the next administration.

He pledged to stay neutral in the election, but was widely thought to have backed former foreign minister Zalmai Rassoul, who performed poorly with just 10 percent of the results announced on Sunday. Abdullah was a close friend and adviser to Ahmad Shah Massoud, a revered anti-Taliban leader who was assassinated two days before the September 11, 2011 attacks on the United States. Polling day was hailed a success by Afghan officials and foreign allies as the Taliban failed to launch a major attack despite threats to disrupt a process it dismisses as a US plot to install a puppet government. -yahoo

Hajj applications to be received from today

Hajj applications to be received from today