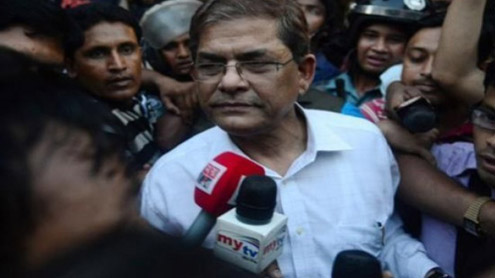 A Bangladesh court sent the country’s second most senior opposition leader to jail on Sunday, a prosecutor said, a move set to trigger renewed protests in the politically volatile nation. The court in Dhaka denied bail to Fakhrul Islam Alamgir, secretary-general of the Bangladesh Nationalist Party (BNP), who is charged with murder during violence in the run-up to a controversial general election in January. “The metropolitan magistrate rejected bail for Alamgir and two other BNP officials and sent them to jail,” prosecutor Abdullah Abu told AFP. The detention comes amid a government crackdown on the BNP and its 18 smaller allies, all of whom boycotted the violence-plagued election and allowed the ruling Awami League to win an absolute majority.

The BNP, which was blamed for much of the pre-poll violence that left hundreds dead, has announced nationwide demonstrations for Monday to protest at the court’s decision. “These are false, fabricated and politically motivated cases. They are part of the government’s ongoing crackdown on the opposition,” said BNP spokesman Rizvi Ahmed. Alamgir and thousands of other BNP officials and supporters were detained for months before the elections after being charged with various offences. BNP leader and former primer minister Khaleda Zia was also kept under virtual arrest for weeks.

Alamgir was charged with killing a policeman and three bus passengers in three separate incidents of violence before the January 5 polls. Most of those rounded up including Alamgir were later released on bail after the protests calmed down in the weeks after the elections. But a higher court overturned Alamgir’s release after an appeal by the government. This forced him to surrender on Sunday to the metropolitan magistrate’s court and apply for bail, which was denied.