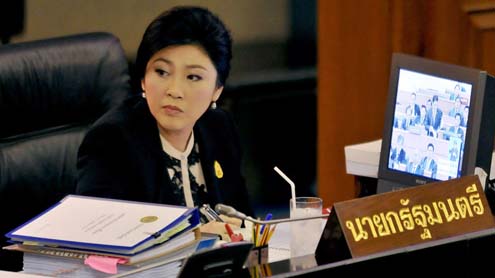 BANGKOK: Several Thai anti-government protesters were wounded after gunmen opened fire on a rally site in Bangkok, authorities said Saturday, as tensions rise ahead of a planned city-wide “shutdown” to heap more pressure on the caretaker government.

The kingdom is the grip of a political crisis that has led to parliament being dissolved amid mass protests to topple Prime Minister Yingluck Shinawatra and end the influence on Thai politics of her wildly divisive brother, Thaksin.

Protesters are seeking to block a snap election called for Feb 2, and want Yingluck to resign immediately. One protester was seriously wounded after unknown gunmen fired their weapons at the protesters’ main rally site in the capital in two separate attacks early Saturday, Thai police told AFP.

The toll was confirmed by the city’s Erawan emergency medical centre, who said one man remained in a “critical condition”. Eight people, including a policeman, have been killed and dozens injured in street violence in recent weeks, and the government has voiced fears of more bloodshed as protesters refuse to back down in their efforts to oust the Shinawatras.

Authorities have raised fears that a planned “shutdown” by the anti-government protesters on Monday could lead to more violence. One company of soldiers was deployed at each of 37 locations — including government offices — across the capital on Friday night, an army spokesman told AFP.

Thousands of police are also expected to keep the peace. The head of Thailand’s powerful army called for calm ahead of Monday’s action. “I’m concerned about security as many people will come (on Monday) and violence has happened throughout (the protests),” Army chief General Prayut Chan-O-Cha told reporters on Saturday.

“I want to tell all sides not to clash with each other… we are all Thais and we can live together despite our differences,” he said. Prayut also urged Thais to “solve the problems of Thai people” in an apparent rebuttal of concerns voiced by the international community at the deteriorating political situation.

United Nations’ chief Ban Ki-moon on Friday called for “restraint” from all sides, expressing fears the situation “could escalate in the days ahead”. Thailand has experienced several bouts of political violence since Thaksin was ousted as prime minister by royalist generals in 2006.

The billionaire tycoon fled the kingdom in 2008 to dodge jail for a corruption conviction that he says was politically motivated. He is hated by the anti-government protesters, who say his money has poisoned Thailand’s politics, but draws strong loyalty from the northern half of the country.

The protesters want to suspend Thailand’s democracy to allow reforms aimed at rooting out his influence. But his sister Yingluck’s Puea Thai party is expected to win the Feb election if it goes ahead. – Dawn