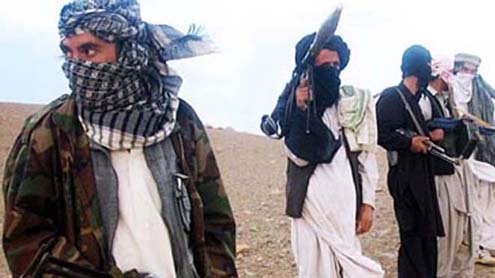 KABUL: The Taliban denied Tuesday that they dispatched a 10-year-old girl to carry out a suicide attack against Afghan police, a day after the girl said her brother wrapped her in an explosives-packed vest but that she refused to blow herself up at a checkpoint in Helmand province.

Border police in the southern Afghan province arrested the girl’s father, Abdul Ghfar, and were searching for the brother, a police commander said. The girl, who was detained Monday and identified herself only as Spozhmai, said her brother is a Taliban commander.

Taliban spokesman Qari Yousef Ahamdi denied any involvement in the alleged plot, which he dismissed as government propaganda.

”We never do this, especially with girls,” he said.

Spozhmai spoke to journalists Monday after Afghanistan’s Interior Ministry announced her detention and said she was just 10 years old. Addressing television cameras, she said her brother, named Zahir, told her to approach a checkpoint and ask the deputy commander for a ride with him to neighboring Kunar province.

”I agreed, then he attached the vest on my body and told me to spend the night here and leave in the morning,” she said. But after she and her brother spent the night somewhere, she said she had second thoughts. ”I said I won’t go, then he took off the vest and tried to convince me that they (police) will die and I will remain alive,” Spozhmai said.

She said her brother then fled with the vest. Police said they believed her account.”‘The guy named Zahir had the suicide vest and escaped, but she was still there and when our commander of the battalion heard her voice, they surrounded the area and brought this girl to their base, and we all heard her story on how she was forced into this action,” Col Hamidullah Sediqi said.

Afghan President Hamid Karzai condemned the Taliban, saying that ”using a child as a suicide bomber is un-Islamic and goes against Afghan culture and beliefs.”

Although the Taliban deny it, human rights groups say the insurgent group has occasionally dispatched children for suicide bombings. But girls have been used only rarely, according to Heather Barr, Afghanistan senior researcher at Human Rights Watch.

”There have been very few documented cases of girls being involved in suicide bomb attacks,” Barr said. According to Human Rights Watch, an 8-year-old girl was killed in central Uruzgan province in 2011 when a bag of explosives the Taliban instructed her to carry to a police checkpoint detonated. -Dawn