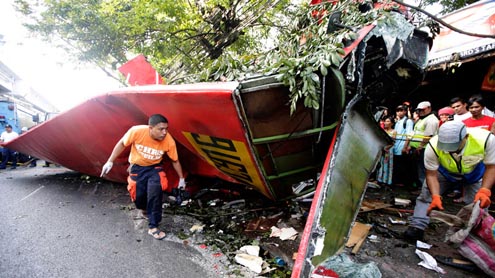 MANILA: Twenty-two people were killed when a commuter bus plunged from an elevated highway onto a van in Philippine capital Manila on Monday, police said, warning the death toll could rise.

Twenty of those who died in the accident in the sprawling city were on board the bus, with the other two fatalities from the van, traffic investigator Jose Abuyog said. “It (the death toll) could go even higher,” as some of the injured are in serious condition, he told AFP, adding that the cause of the accident was still being determined.

A further 20 people were injured when the bus fell six metres (20 feet) from the highway onto the road below. The bus driver, who survived, will undergo tests and questioning, said land transportation regulatory board chairman Winston Ginez.

Don Mariano Transit, the bus company involved in the accident, has been suspended for 30 days as its other vehicles are examined, Ginez told ABS-CBN television. In 2011, three people were killed and four injured when a bus fell from the same elevated highway. – Dawn