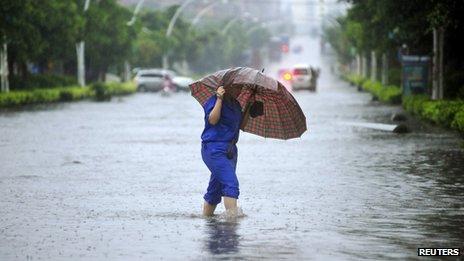 Typhoon Haiyan is battering the central Philippines with sustained winds of 235 km/h (146mph). Meteorologists say that if initial estimates based on satellite images are borne out, it could be the most powerful storm ever to make landfall.

The storm has forced millions in storm-prone areas to seek shelter across 20 provinces, officials say. The region was already struggling to recover from a powerful earthquake last month. The authorities have warned that more than 12 million people are at risk from the category-five storm, including in Cebu, the country’s second largest city with a population of 2.5m. The storm – known locally as Yolanda – was not expected to directly hit the capital Manila, further north. Mai Zamora, from the charity World Vision, in Cebu, told the BBC:

“The wind here is whistling. It’s so strong and the heavy downpours are continuing.” “We’ve been hearing from my colleagues in [the city of] Tacloban that they’ve seen galvanised iron sheets flying just like kites.” Schools and offices closed, while ferry services and local flights were suspended. Hospitals and soldiers are on stand-by for rescue and relief operations. The extent of the damage remains unclear, with authorities saying phone-lines are down in many areas. The governor of the Southern Leyte province, Roger Mercado, tweeted on Friday morning that fallen trees were blocking roads, hampering the emergency effort.

Roxane Sombise, a resident of Tacloban, in Leyte, told the BBC: “I think our house is actually shaking… I just want it to stop.” A teacher in Southern Leyte province told a local radio station that her school was “now packed with evacuees”. Jeff Masters, meteorology director at the private firm Weather Underground, said in a blog post that the damage from Haiyan’s winds must have been “perhaps the greatest wind damage any city on Earth has endured from a tropical cyclone in the past century”.State meteorologist Romeo Cajulis told AFP news agency Typhoon Haiyan had made landfall over Guiuan at04:40.

The US Navy’s Joint Typhoon Warning Centre, which typically gives higher readings as they are based on a shorter period of time, said shortly before Haiyan’s landfall that its maximum sustained winds were 314 km/h (195 mph), with gusts up to 379 km/h (235 mph). Waves as high as 5m (15ft) could be seen from the islands of Leyte and Samar, Reuters news agency reported. The storm is forecast to move over to the South China Sea north of Palawan Island on Saturday, meteorologists say. In its path are areas already struggling to recover from a 7.3-magnitude earthquake last month, including the worst-hit island of Bohol. About 5,000 people are still living in tents in Bohol after losing their homes in the quake, which killed more than 200 people.

Earlier, President Benigno Aquino warned people to leave storm-prone areas and urged seafarers to stay in port. “No typhoon can bring Filipinos to their knees if we’ll be united,” he said in a televised address. Meteorologists in the Philippines warned that Haiyan could be as devastating as Typhoon Bopha in 2012. Bopha devastated parts of the southern Philippines, leaving at least 1,000 people dead and causing more than $1bn (£620m) in damage. It is the 25th typhoon to enter Philippine territory this year. -Bbc