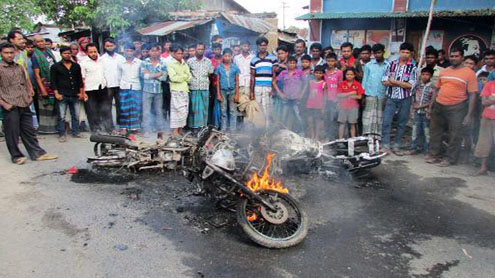 At least five people were killed in nationwide clashes as Bangladesh’s opposition Sunday began a three-day strike to demand the prime minister quit and make way for polls under a caretaker government.

Police said officers opened fire at protesters in the western town of Nagarkanda after some 3,000 supporters of the main opposition Bangladesh Nationalist Party (BNP) ransacked a rural market and attacked police with bricks. “We opened fire in self-defence,” district police chief Jamil Ahsan told AFP, adding that one opposition activist was killed in the firing and five were wounded. Four other people were killed elsewhere in Bangladesh as the strike got underway, with small protests erupting across the country and thousands of extra police and paramilitary officers deployed.

The BNP and its Islamic allies ordered the strike to go ahead after last-minute talks between Prime Minister Sheikh Hasina and opposition leader Khaleda Zia late on Saturday failed to defuse the mounting crisis. Zia rejected Hasina’s appeal to call off the strike, issued during a 40-minute phone conversation – believed to be the first time in at least a decade that the two “battling begums” have spoken. The opposition has called the strike and protests in a bid to force Hasina’s government to resign ahead of elections, due in January 2014, and set up a caretaker administration of technocrats to oversee the polls. Zia, who has twice served as premier, has since Friday branded the government “illegal”, citing a legal provision that requires a neutral government to be set up three months before elections.

Hasina said such an arrangement is unconstitutional, proposing instead an all-party interim government led by her to oversee the January polls. But the BNP has rejected the proposal, claiming it would allow Hasina to rig results. Saturday’s phone talks came a day after tensions spiked as opposition supporters clashed with the ruling party and police in cities and towns across the nation, leaving at least seven people dead and hundreds injured. In Dhaka on Sunday, opposition supporters torched buses and exploded more than a dozen small bombs, while police retaliated with tear gas and rubber bullets.

Shops, businesses and schools were shut, fearing violence. Security was tight in the capital, with around 10,000 paramilitaries and police officers deployed to prevent clashes, Dhaka police spokesman Masudur Rahman told AFP. Two ruling party supporters were beaten and stabbed to death by opposition supporters, police officials told AFP, while separately two activists from the country’s largest Islamic party were also killed. Overnight Saturday, one of the activists from the Jamaat-e-Islami party, a key ally of the BNP, was also shot dead during clashes with police in the western city of Rajshahi. “There were 400-500 opposition supporters who exploded small bombs and attacked police,” the deputy police commissioner in Rajshahi, Proloy Chisim, told AFP, confirming the shooting death.

Clashes between protesters and police and ruling party activists also erupted in at least a dozen other towns and cities, leaving scores injured, some hit by bullets, police and local media said. Deputy Law Minister Quamrul Islam blamed the opposition for the fighting, telling a ruling party rally in Dhaka that “we wanted to talk, but they chose the path of violence”. But BNP spokesman Rizvi Ahmed accused the government of ordering police to attack its peaceful demonstrations, adding that the party was still open to talks if Hasina agreed to set up a neutral government. “Since Friday 12 of our activists have been killed and more than 500 injured. Police have arrested more than 1,000 of our supporters,” he told AFP. Tensions have been rising in Bangladesh since Hasina’s ruling Awami League party rejected an October 24 deadline set by the BNP for accepting its demands. -Dailytimes