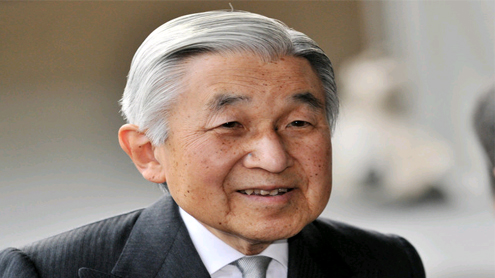 The 78-year-old head of state’s surgery lasted just over five hours at the University of Tokyo Hospital.The emperor, who has suffered from poor health in recent months, plays a largely ceremonial role but is respected deeply by many Japanese.He ascended the throne in 1989 following the death of his father, Emperor Hirohito.The operation began at around 09:30 (00:30), public broadcaster NHK said, and it reported a successful end at 15:30.The emperor is expected to remain in hospital for about two weeks.

Prostate cancer
Doctors decided to carry out the operation after tests earlier this month, saying the surgery aimed to “maintain and to improve his majesty’s daily life”, according to a spokesman.Last year, Prince Akishino, who is second in line to the throne, called for debate on a retirement age for the head of state, who spent almost three weeks in hospital in November 2011.Emperor Akihito also had surgery for prostate cancer in 2003 and suffered stress-related health issues in late 2008.In 2009, the Imperial Household Agency said he would cut back on official duties such as speeches and meeting foreign dignitaries.Under Japan’s 1947 Imperial House Law, the emperor is succeeded on his death by a male relative. Crown Prince Naruhito is first in line to the throne, followed by his younger brother Prince Akishino.Women cannot inherit the Japanese throne and so Princess Aiko, the daughter of Crown Prince Naruhito, cannot succeed her father.Third in line to the throne is Prince Hisahito, Prince Akishino’s son. – BBC