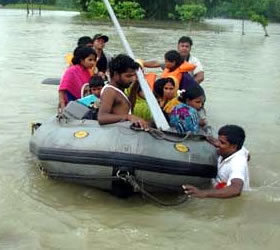 ISLAMABAD, (APP): German public donations for the flood victims in Pakistan have almost doubled in a week and crossed US$ 210 million by the end of this week. German Institute on Social Matters, DZI, which monitors fund raising by German relief organizations, stated that 45 German relief organizations had collected US $ 210 million by Friday, Sept 17, 2010.According to Pakistani embassy in Berlin the donations were at the level of US $ 110 million last week.Donations for the flood victims are still pouring in. In the beginning the flow of donations was slow but it picked up in the wake of strong appeals by the German political leadership and intense coverage of the floods by the German media.
According to DZI more than six organizations have collected over US$ 13 million each.These are Entiwicklung, Hilft, German Red Cross-DRK, Aktion Deutschland Hilft, Deutsche Welthungerhilfe, Diackonie Katastrophenhihlfe and the Claritas. – App