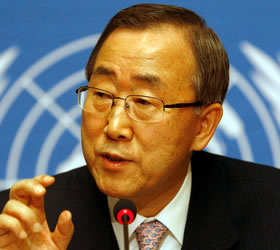 UNITED NATIONS, (APP) – UN Secretary-General Ban Ki-moon is “closely following” the situation in occupied Kashmir which is under 24-hour curfew following bloody clashes between Indian security forces and demonstrators demanding an end to New Delhi’s rule, a UN spokesman said Thursday.
But Spokesman Matin Nesirky, responding to a series of questions at the regular noon briefing, said the UN chief has no comments on the situation in disputed State.“The secretary-General is aware of the developments there and is monitoring the situation,” he added.
Asked how long the Secretary-General will monitor the situation, the spokesman said he could not say but would make available his comments as soon as they become available.
According to a dispatch in The New York Times, Indian security forces have locked down Kashmir with the round-the-clock curfew, and “everyone  men, women, teenagers, toddlers has been locked in. There is no telling when the curfew will be lifted…”
Asked whether the United Nations is providing humanitarian aid to the under-siege people, the spokesman said he had nothing more to say on the subject.
In its dispatch from Srinagar, the Times said the people in occupied Kashmir were unable to get even medicines and groceries because of the strict curfew. Worse, ambulances cannot operate without prolonged security checks. – App
Twitter Facebook Google + Linkedin Comments