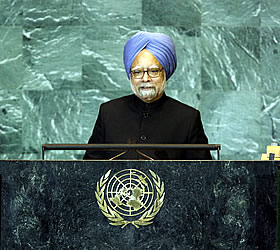 NEW DELHI: Prime Minister Manmohan Singh  on Monday virtually ticked off the Supreme Court, saying that it “should not get into policy  formation”. The trigger for this rebuke was the apex court’s anger at grains rotting in FCI and government godowns, and its direction to agriculture minister Sharad Pawar to distribute grains for free to families living below the poverty line.

Talking to a group of editors on Monday morning, Singh said if the court’s directive was to be heeded, free foodgrains had to be given to 37% of the country’s population — the estimate of the number living below the poverty line. While saying that he had respect for the court’s “sentiments”, the PM strongly argued against the idea of giving away food for free, saying it would would kill farmers’ incentive to produce, thus creating a different set of problems.

The issue, which in the last one week has snowballed into a bone of contention between the government and the judiciary, appears to have been laid to rest following the PM’s strong remark. Soon after his observation was broadcast on TV networks, the Supreme Court appeared in a distinctly conciliatory mood.
It expressed satisfaction with the government’s decision to distribute 25 lakh tonnes of free foodgrains among BPL families, while indicating that it did not intend to pursue the matter further. “This is a very big gesture which will go a long way to ensure food security,” said a Bench comprising Justices Dalveer Bhandari and Deepak Verma.

Significantly, government had stressed that the release of 25 lakh tonnes of foodgrains was only an ad hoc measure.

The Bench even expressed satisfaction with Centre’s response to its suggestions to make the public distribution system (PDS) effective. In its response, the Centre side stepped the suggestions made by the Bench. Yet, the court found the affidavit to be “very comprehensive”.

Less than a week back, the Bench was expressing anguish at the mismanaged and corruption ridden PDS and news reports about rotting of thousands of tonnes of foodgrains at FCI and state government godowns. It had observed, “It is time we developed a culture of zero tolerance towards corruption so as to ensure two square meals for the hungry and the poor. What will be the choice of the government — allow the foodgrains to rot or give it free to the poor and hungry. The choice is obvious.”

Though there was not much assurance from the government on the suggested remedial measure of total computerisation of movement of foodgrains from the godowns to retail shops to fight corruption and pilferage and a virtual rejection of the suggestion to distribute foodgrains free or at cheap prices, the Bench repeatedly said the Centre’s affidavit comprehensively answered its suggestions. “We are very happy with the developments,” the Bench said on more than one occasion.

Assistant solicitor general Mohan Parasaran read out the entire 19-page affidavit filed by joint secretary in ministry of consumer affairs C Vishwanath, and was even unusually reactive to media reports about the stand of the government. “There is no confrontation with the Supreme Court,” he assured.

The Bench, too, clarified that there was no order or direction to the Centre to distribute foodgrains free. It was only a suggestion mentioned in the order, it said.

Counsel for petitioner People’s Union for Civil Liberties, Colin Gonsalves, said he would file a comprehensive response to the Centre’s stand within a week. The matter was adjourned for further hearing on September 24.

The Centre admitted that there were some instances of wastage of foodgrains in FCI and state government godowns but dismissed it as “usual” wastage when foodgrain procurement had been done in record quantities for the last three years.

On the Food Security Act, Parasaran said the government was actively considering the matter and would finalise the draft after taking into account the suggestions from Sonia Gandhi-headed National Advisory Council (NAC) and other stakeholders.

In response to SC’s suggestion for abolition of ration cards for above poverty line (APL) families, the Centre said it was not required to resort to such drastic steps as allocation to APL families was being given only after meeting the requirement of families categorised as poorest of the poor under the Antyodaya Anna Yojana and the BPL families.

Centre made plain its disagreement with another suggestion of the court — to procure foodgrain as much as its storage capacity to avoid wastage. The Centre said it was impossible to limit procurement as doing this would hurt the Centre’s policy to give attractive price to farmers and encourage them to grow more foodgrain.

If procurement was limited to storage capacity, then farmers would be left at the mercy of traders who would not pay remunerative prices, adversely affecting the cropping pattern in future, Parasaran argued.

On SC’s suggestion to carry out a fresh survey to identify exact number of AAY, BPL and APL families to understand the requirement of foodgrains for these families, the Centre said survey was the responsibility of state governments and they had been asked to do so by the Planning Commission. -timesofindia

Lailatul Qadr observed with due reverence