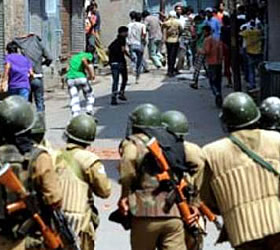 SRINAGAR: Despite reports of desertions in its ranks and threats of social boycott, J&K police has emerged as a big draw for young job hunters in employment-starved Kashmir. Ignoring calls by hardliners to shun the khaki force, nearly 60,000 men applied for less than 3,000 jobs in J&K police — about 200 applicants for one constable’s post.

The applications piled up over the last few months, about the time when the situation in the Valley appeared to be spinning out of control with the cops particularly being at the receiving end of public wrath.

Lack of jobs has been a big spur for the protests that brought thousands of young educated men on to the streets. Official estimates of the number of unemployed in the Valley stands at 3 lakhs.

Khoda told reporters the department held a recruitment rally in Baramulla district in July and was overwhelmed with the response. “Over 8,000 people turned up for 412 posts despite turmoil in the district,” he said, and added that even stone-pelters attended the rally. He said the department was mulling more on-the-spot recruitment drives across the Valley, particularly in Srinagar’s downtown area to end the unrest.

The top cop rubbished reports on desertions and insubordination. He claimed no police personnel had quit since mid-June when Kashmir erupted in anger against the alleged staged encounter of three north Kashmir youth and a 17-year-old boy’s killing in police action. Over 60 people, including women and children, have died in police firing on protesters since then.

State government sources said J&K CM Omar Abdullah, who has called for a proactive approach including the phased revocation of the controversial Armed Forces Special Forces Act to deal with street protests, has ordered creation of more police jobs to induct youth from the troubled areas.

Meanwhile, in its ongoing drive to reach out to the people, Kashmir range IGP Kashmir, S M Sahai, attended police-public meetings in Ganderbal and Budgam districts. “At Ganderbal District Police Lines, around 300 people including senior citizens and sarpanchs participated,” a police spokesman said. “Sahai assured the people that police will adopt maximum restraint while dealing with law and order situations.” -timesofindia