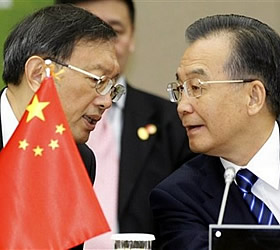 This denouement should not have been unexpected as a riposte to the joint United States-South Korean strategy of responding to the Cheonan sinking in March with heightened rhetoric, referral of the issue to the United Nations, and a show of military force in Northeast Asian waters – all designed to challenge China’s role as acknowledged stakeholder in matters of the peninsula.

China and North Korea set aside their many differences and presented a united front to the world on the future of the peninsula, effectively repudiating the US and South Korean formula of reunification in favor of the continued division of Korea.

Whether the US policy is remembered as a successful piece of brinksmanship, counter-productive provocation, or another sacrifice of the well-being and freedom of the North Korean people for the sake of vague and unattainable goals may well depend on the fate of another diplomatic initiative that is probably closer to Obama’s heart: the high-stakes effort to roll back Iran’s nuclear program.

Certainly, the tightened embrace between China and North Korea cannot be pleasing to Barack Obama or South Korean President Lee Myung-bak in the near term.

A statement on China’s Ministry of Foreign Affairs website gave no satisfaction on the issue of the sinking of the South Korean corvette Cheonan, a piece of alleged egregious North Korean misbehavior that the US and South Korea still insist must be addressed before contacts can normalize.

Instead, the statement recorded a call for the resumption of the six-party talks on North Korea’s nuclear program, a process that gives China a more central role than the US or South Korea or, for that matter, the North in better days, are eager to grant.

To rub salt in the wound, the Chinese side heaped praise on North Korea for its constructive approach to security on the peninsula (after blandly acknowledging the Cheonan uproar with the observation that “trends in a new direction emerged after the letter of the UN Security Council”):

The Chinese side respects and supports the positive efforts of the North Korean side in decreasing tensions on the peninsula and improving external conditions. It proposes that various parties uphold and preserve the banner of the stability and denuclearization of the Korean Peninsula and moderate the current tense situation by reopening the six-party talks as quickly as possible. [1]

Kim Jong-il’s trip last week to Changchun n Jilin province was described in the Western media in dismissive terms, focusing on assumptions that he found it necessary to beg Chinese assistance in order to smooth the way for the expected succession of his third son, Kim Jong-un, to the position of Exalted-Leader-in-Waiting.

However, what the US and South Korea undoubtedly focused on was the decision by the Chinese leadership to openly acknowledge the visit, dispatch Hu to meet with Kim, and give the trip the color of an official visit.

Though the statement in the Ministry of Foreign Affairs announcement that Kim visited China “at the invitation of President Hu Jintao” might be dismissed as standard boilerplate, the fact remains that China decided to receive Kim’s delegation and publicize the event.

Now that China has explicitly placed its Korean Peninsula eggs in Kim Jong-il’s basket, the idea that Beijing would acquiesce to the collapse of the regime in Pyongyang and reunification under the aegis of South Korea is a seriously discounted commodity.

For the time being, it appears that China has called South Korea’s bluff. Lee Myung-bak quickly backed down, at least quasi-officially. Lee’s remarks to his cabinet on Kim’s visit were transmitted to the South Korean media by a government spokesperson:

“I positively evaluate that Chairman Kim frequents China,” Lee said during a Cabinet meeting, according to presidential spokeswoman Kim Hee-jung … Lee was quoted as saying that Kim’s repeated trip to China would have a positive influence on North Korea’s economy as it would provide him with more opportunities to see China’s economic development firsthand. “I see China’s role positively as well,” the president added. [2]

Yonhap made the observation:

The rare revelation of Lee’s remarks on Kim’s China trip apparently aims to counter an impression that Seoul is blindly opposed to a gesture by Pyongyang and Beijing to cement their ties.

As a face-saving measure, discussions/accusations on the Cheonan sinking will apparently continue in parallel with the six-party talks:

[S]ome government officials expressed worries that Seoul could not stall the six-party talks indefinitely if Pyongyang and Beijing agree to give priority to them.

“Realistically, there is zero possibility of the North admitting its involvement in the Cheonan sinking and apologizing for it,” a government official said. “But at the same time we can’t just let it pass, which is what the North wants.”[3]

As befits its status as the world’s only superpower, the United States did not respond to the changed situation with the same alacrity as South Korea.

Instead, the Obama administration marked the occasion by announcing additional sanctions against North Korea.

Students of presidential power may find it interesting that the sanctions – indeed much of the edifice of unilateral sanctions against Iran and North Korea – are authorized under a 1994 Executive Order, No 12938, signed by president Bill Clinton. To continue to exercise this authority, every year the American president must certify that the United States is in a state of national emergency due to the threat of weapons of mass destruction. Obama issued the certification most recently on November 9, 2009, and will presumably extend the state of national emergency again later this year.

The executive order declaring a weapons of mass destruction state a national emergency is elastic enough to allow the United States to explicitly implace sanctions to interdict luxury goods such as “jewelry, luxury cars and yachts”, in the words of Treasury Under Secretary Stuart Levey.

“I think the administration has got this right,” said Patrick Cronin, director of the Asia security program at the Center for a New American Security, who said that naming companies from countries like China would have only invited trouble.

“They want to maximize the potential to put pressure on North Korea and at the same time not unnecessarily damage the rest of your interests. Smart sanctions here means getting specific with the entities that are doing the dirty dealing,” he said.

Moreover, designating these entities as targets places them as a higher priority for intelligence gathering, which has its own intrinsic benefit, Cronin said.

Cronin concluded with some classic analyst-speak:

The only, faint hope for effective Chinese pressure on North Korea on America’s behalf – and a sanctions regime that really “works” – would be the threat of US sanctions against Chinese banks and other businesses handling North Korean transactions.

And the United States has no interest in going there, at least for now.

It is possibly, as I’ve argued elsewhere, that the Obama administration is holding North Korea sanctions against China in reserve to compel Beijing’s cooperation on Iran as needed.

Indeed, considering its full-throated demands for additional US sanctions against North Korea, the Lee Myung-bak government has been remarkably backward in supporting the key US foreign policy initiative – Iran sanctions.

The South Korean media reported [5] on August 27 that South Korea would probably institute merely “symbolic” sanctions against Iran – a remarkable statement for a staunch US ally, but an understandable one for an ally that suspects that the US commitment to North Korea sanctions is only conditional and situational.

But, when viewed strictly in the context of Korean affairs, the Obama administration appears to be folding as promptly as Lee Myung-bak.

But where does this leave China?

The Chinese leadership probably has some serious ambivalence about hitching its Korea wagon to the fate of the Kim family enterprise.