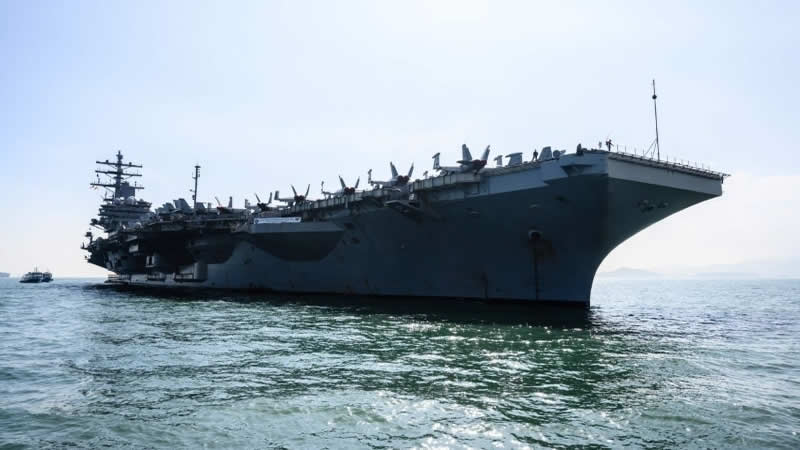 The Pentagon has decided to move an aircraft carrier from the Asia-Pacific region to the Middle East to support the withdrawal of US troops from Afghanistan, The Wall Street Journal reported on Wednesday.

The USS Ronald Reagan, the only American aircraft carrier in Asia-Pacific, is currently based in Yokosuka, Japan.

The United States Naval Institute fleet tracker reported on May 22 that after completing its winter maintenance period in Yokosuka, USS Ronald Reagan would start its spring patrol and had left Japan last week.

It will operate in the Middle East for up to four months, WSJ reported.

Mr Biden unveiled plans last month to pull all US and coalition troops out of Afghanistan by Sept 11. Officials had said then they would keep a carrier and its accompanying ships in the area to provide security while the forces move out of Afghanistan.

The Department of Defence said on Monday that it was discussing various options with Afghanistan’s neighbours, including Pakistan, to maintain their access to Kabul even after the withdrawal. The options being discussed with neighbouring states include acquiring “basing facilities”, the Pentagon said.

At a recent congressional hearing, US Assistant Secretary of Defence for Indo-Pacific Affairs David F. Helvey told the Senate Armed Services Committee that “Pakistan has allowed us to have overflight and access to be able to support our military presence in Afghanistan”.

But Foreign Office spokesperson Zahid Hafeez Chaudhri told journalists in Islamabad earlier this week that “there is no US military or air base in Pakistan, nor was any such proposal envisaged. Any speculation on this account is baseless and irresponsible and should be avoided”.

The issue of having access to Afghanistan after the pullout resurfaced at a news briefing on Monday.

“Is there anything that the US is looking for right now from Pakistan in terms of what happens after the (US) withdrawal (from Afghanistan) is complete?” a journalist asked.

“I don’t have any specific updates in terms of the potential for overseas bases there, after our withdrawal. These are obviously diplomatic discussions that are ongoing and are clearly not complete,” Pentagon press secretary John F. Kirby replied.