Situation in India ‘beyond heartbreaking’: WHO chief 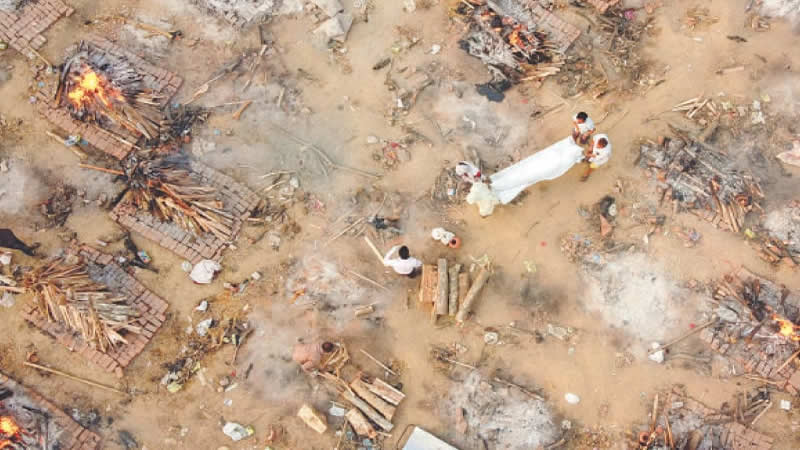 The World Health Organisation chief voiced alarm on Monday at India’s record-breaking wave of Covid-19 cases and deaths, saying the organisation was rushing to help address the crisis.

“The situation in India is beyond heartbreaking,” Tedros Adhanom Ghebreyesus told reporters.

He spoke as India battled a catastrophic coronavirus wave that has overwhelmed hospitals, with crematoriums working at full capacity.

A surge in recent days has seen patients’ families taking to social media to beg for oxygen supplies and locations of available hospital beds, and has forced the capital New Delhi to extend a weeklong lockdown.

“WHO is doing everything we can, providing critical equipment and supplies,” Tedros said.

He said the UN health agency was among other things sending “thousands of oxygen concentrators, prefabricated mobile field hospitals and laboratory supplies”.

The WHO also said it had transferred more than 2,600 of its experts from various programmes, including polio and tuberculosis, to work with Indian health authorities to help respond to the pandemic.

The country of 1.3 billion has become the latest hotspot of a pandemic that has killed more than three million people worldwide, even as richer countries take steps towards normality with accelerating vaccination programmes.

The US and Britain rushed ventilators and vaccine materials to help India weather the crisis, while a range of other countries also pledged support.

Also on Monday, India ordered its armed forces to help tackle surging new coronavirus infections that are overwhelming hospitals in the country.

And where possible, military medical infrastructure would be made available to civilians, a government statement said, as new coronavirus infections hit a record peak for a fifth day.

Tedros, meanwhile, lamented that global new case numbers have been rising for the past nine weeks straight.

“To put it in perspective,” he said, “there were almost as many cases globally last week as in the first five months of the pandemic.”

The United States remains the worst-affected country, with some 572,200 deaths and over 32 million infections, followed by Brazil and Mexico. But India, in fourth place, has in recent days been driving the global caseload.

The country, which has recorded over 195,000 deaths, registered 2,812 new deaths and 352,991 new infections on Monday alone — its highest tolls since the start of the pandemic.

She warned that India was not unique, pointing out that a number of countries had seen “similar trajectories of increases in transmission”.

“This can happen in a number of countries… if we let our guard down,” she said. “We’re in a fragile situation.”

The Indian crisis has also taken a toll on the Covax programme aimed at providing equitable access to Covid-19 vaccines, with a particular focus on 92 poorer nations.

Prior to the surge, India was exporting tens of millions of AstraZeneca shots made domestically by the Serum Institute through Covax, which is co-run by the WHO, the Gavi vaccine alliance and the Coalition for Epidemic Preparedness Innovations (CEPI).

But once cases started surging, New Delhi froze exports — including to Covax — to prioritise India. This has left Covax short by 90m doses that had been intended for 60 low-income countries in March and April, the WHO and Gavi said.

Eid Al Fitr 2021 in UAE to fall on a Thursday, says expert