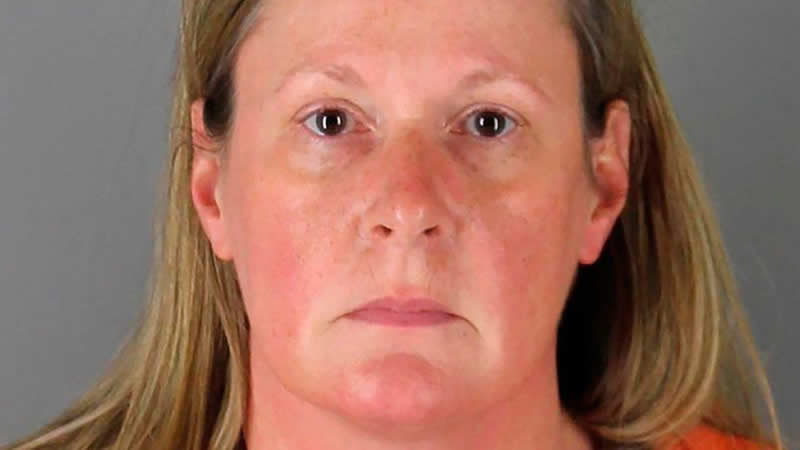 A white former police officer who shot dead a black motorist in Minnesota has been charged with second-degree manslaughter, prosecutors say.

Responding to the charges, the Wright family’s lawyer Ben Crump said the killing was an “intentional, deliberate, and unlawful use of force”.

Both Mrs Potter and local police chief Tim Gannon have resigned. The killing has sparked clashes between police and protesters in Brooklyn Center – a suburb of Minneapolis – and late on Wednesday, several hundred demonstrators again defied a curfew to gather outside police headquarters.

As on previous nights, protesters threw bottles and other projectiles at police who responded with stun grenades and pepper spray.

Minneapolis is already on edge amid the trial of a white ex-police officer accused of murdering African-American George Floyd.

Minnesota’s Bureau of Criminal Apprehension (BCA) said Mrs Potter was taken into custody on Wednesday morning. She was booked into Hennepin County Jail on probable cause second-degree manslaughter before bail was posted.

She is due to make her first court appearance on Thursday.

The charge carries a maximum sentence of 10 years in prison and a $20,000 (£14,500) fine. Prosecutors must show that Mrs Potter was “culpably negligent” and took an “unreasonable risk” in her actions, Reuters reported.

“With the news of the decision to charge the former Brooklyn Center police officer with manslaughter comes a prolonged period of continued grieving, hurt and understandable anger,” he said.

“Our task as a city and as a leadership is to allow for the expression of those very legitimate voices and to also create a pathway forward toward healing and renewal of our stability and strength as a community.”

For days outside the police station in Brooklyn Center, activists have stamped their feet to ward off the cold, and kept a vigil on the sidewalk.

For them, the news that the former officer, Kimberly Potter, will be charged with manslaughter, has been a positive development. Mrs Potter had mistakenly brandished a gun, instead of a Taser, and killed Duante Wright.

Earlier in the week, the protesters had made dark jokes about Tasers and guns, pointing out that they look and feel distinct: “They’re different colours,” said one activist, disgusted, as he spoke with a friend.

Like others who stood outside the police department, they were both angry that Mrs Potter was allowed to resign, saying that she should have been fired.

“If I don’t do my job, I get fired,” said another protester. “If I kill someone, I get fired.”

In a statement, lawyer Mr Crump said “no conviction can give the Wright family their loved one back”.

“A 26-year veteran of the force knows the difference between a Taser and a firearm. Kim Potter executed Daunte for what amounts to no more than a minor traffic infraction and a misdemeanour warrant,” he said.

On Tuesday the families of Mr Wright and Mr Floyd came together to demand an end to the killing of unarmed black Americans by police.

On Monday, Police Chief Gannon said the shooting of Mr Wright – who had a one-year-old son – appeared to be an “accidental discharge” after Mrs Potter mistook her service pistol for a stun gun.

But the families have rejected the explanation.

Daunte Wright was pulled over for an expired tag on his car licence plate. Family members say he was racially profiled.

Bodycam footage showed Mr Wright fleeing from officers after they told him he was being arrested for an outstanding warrant.

Mr Wright’s mother told reporters her son had called her after he was pulled over and that she had offered to give insurance details to police over the phone.

She said she heard police order him to get out of the vehicle. There was a scuffling sound and an officer told him to hang up the phone.

When she was eventually able to call back, his girlfriend answered and told her he had been shot.

“She pointed the phone toward the driver’s seat and my son was laying there, unresponsive,” she said in tears.

“That was the last time that I’ve seen my son.”