Kashmir is on the brink of genocide, warns American scholar 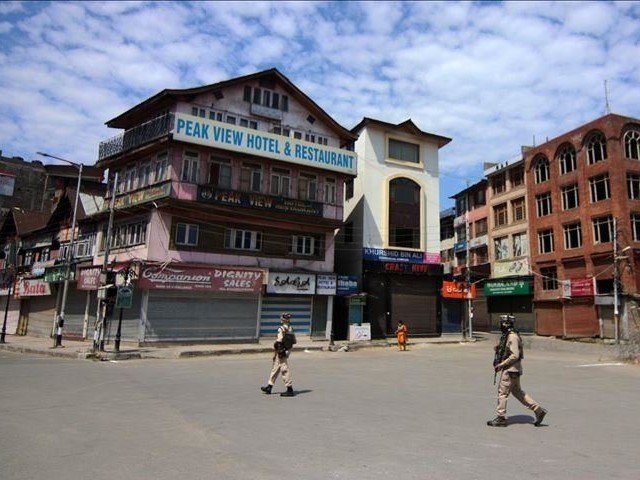 The systemic state-sponsored discrimination against Kashmiri Muslims bears all the hallmarks of a genocide, according to the founder and president of Genocide Watch, a global organization that flags the intentional destruction of ethnic, racial and religious groups.

“We believe that the Indian government’s actions in Kashmir have been an extreme case of persecution and could very well lead to genocide,” said Dr. Gregory H. Stanton, Founding President Genocide Watch.

Dr Stanton, who served at the US Department of State during President Bill Clinton’s term, is known for drafting the United Nations Security Council resolutions that created the International Criminal Tribunal for Rwanda, the Burundi Commission of Inquiry, and the Central African Arms Flow Commission.

Speaking from Washington D.C., where he is based, Dr. Stanton described the situation in occupied Kashmir as appalling. “Kashmir is under military rule and it is a very clear pre-genocidal situation,” he cautioned.

In the picturesque valley, Dr Stanton said, the Indian government has confined more than seven million Kashmiris to their homes. “The state has been under lockdown. The Narendra Modi government imposed a sweeping communications blackout and a curfew that was so draconian that residents couldn’t even step out. In short it is a police state,” warned Dr. Stanton, referring to the situation in the valley after the Hindu nationalist government in New Delhi unilaterally stripped the region of its constitutional autonomy.

According to Dr Stanton the persecution of Kashmir’s Muslims has increased significantly on Prime Minister Modi’s watch. “So many of the early stages of genocide are already present. We don’t wait until it is a full out mass killing campaign to declare genocide. There are early warning signs of genocide now and that’s what we believe is the situation in Kashmir,” explained the American scholar, who is known for examining the stages of genocide in the nineties, which ultimately became known as his ‘10 stages of genocide’ theory.

Shortly after Kashmir’s special status was revoked by the Modi government, the Genocide Watch issued an alert for the region. In its warning, which is based on Dr. Stanton’s ‘10 stages of genocide theory’, the organization cautioned that Kashmir was inching closer to a genocide.

In a no-holds-barred interview, Dr. Stanton, who has served at the US Department of State for several years said, he has little hope that the new Biden administration would denounce the Indian Prime Minister for his actions against Muslims.

“I don’t see a strong foreign policy yet coming out of the Biden administration. I would make it part of our policy that we need to communicate to Mr. Modi that the US will not tolerate the kind of intolerance that he is preaching if we are going to have a good economic relationship with India.”

He said the US would have to employ economic persuasion to convince Prime Minister Modi to abandon his anti-Muslim campaign in Kashmir and across India. “We should condition our economic relations on the improvement of the political situation in India,” said Dr Stanton.

According to Dr Stanton, there is a very slim chance that the US government will adopt such a stance in the US-India relationship, particularly at a time when Washington D.C. is trying to prop up New Delhi to negate Beijing’s growing influence in the region.

“I’m afraid the Kashmir issue will stay on the back burner and we would like to get along with the Modi government. The best way to counter China for Biden would be to promote India at this point,” said Dr Stanton.

Response from the international community in Kashmir’s case, Dr Stanton said, has been ‘shameful’. “I don’t think the global community exists. I think it is a mythical beast that exists somewhere out there,” quipped the 74-year-old American genocide scholar.

“The truth is that we are still a world divided in nation states and a lot of these policies that are made by these states are for their own interest. And they are certainly not human rights oriented. So, what is going to be important for most nation states is their trade with India,” explained Dr Stanton.

At one point during the interview, the former academic also compared India’s prime minister to Adolf Hitler.

“Many Jews in Germany identified themselves as Germans and they fought for Germany in the First World War. The whole idea that they were a threat was made up by Hitler. Unfortunately, that’s the case in India, where Muslims are portrayed as enemies of the country,” explained Dr. Stanton.

“There is no doubt that the Muslims of India are loyal to the country. It is a fiction made up by the Bharatiya Janata Party (BJP) that they are traitors,” he added.

Dr Stanton warned that Modi’s policies would divide the Indian society, which will ultimately make the country unproductive. “It is very harmful for India’s political and economic future. I hope there are opponents of such policies who will unseat Mr. Modi,” said the Washington D.C. based expert on genocide.

Expressing his concerns about the situation, Dr. Stanton said: “If Modi is able to whip India into a froth of hatred, and that is possible, I really do fear for the Muslims.”

“My fears are that if Modi continues to use exclusionary language and passes more exclusionary laws, Muslims are going to be more and more discriminated against and persecuted not just in Kashmir and Assam but all over India,” cautioned Dr. Stanton.

In an hour-long conversation with the Express Tribune, the former fellow at the Woodrow Wilson International Center for Scholars ruled out conflict as a solution for the Kashmir crisis.

“The only solution to the Kashmir situation is ‘real diplomacy’. I actually think that Pakistan currently has a leader who is capable of that. I don’t think India does. So right now, I don’t think that diplomacy is likely to happen,” said Dr. Stanton.

The Washington-based scholar urged the India’s Prime Minister to halt the construction of the dangerous Hindu-nationalist ecosystem. “I appeal to Prime Minister Modi to recognize the history that India has had of a diverse and tolerant society. I am sure he wouldn’t give any thought to that.”