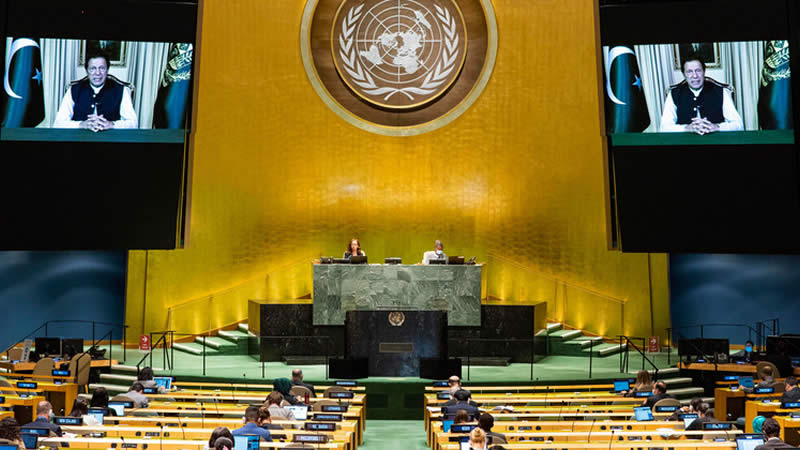 Prime Minister Imran Khan on Thursday proposed a 10-point agenda for urgent action to avert economic collapse in a number of developing countries due to the Covid-19, warning that without economic security, conflicts and disputes would persist and proliferate across the world.

The prime minister joined nearly 100 world leaders at a two-day session of the United Nations General Assembly on the response to the deadly coronavirus pandemic and forging a united path forward to better recovery, including access to a vaccine.

In his speech on the opening day of the summit, Imran also stressed the need for reforming the international financial architecture; building an inclusive and equitable debt management mechanism; constructing a democratic SDG-focused trading system; and installing a fair international tax regime.

Imran said that the coronavirus pandemic has caused immense human suffering, but added that the poorest countries and the poor in all the countries are suffering the most. “Nearly 100 million people in developing countries will fall back into extreme poverty,” he warned.

He said that rich countries have injected $13 trillion as fiscal stimulus to revive their economies but the developing countries did not have that much resources. Pakistan, he said, is also committed under an IMF programme to reduce the budget deficit.

“I am sure other developing countries in our position are facing a similar dilemma. How to stimulate the economy and yet at the same time reduce our budget deficit? The only way we can have the fiscal space to maintain and revive growth is through access to additional liquidity,” Imran said.

In his speech, the prime minister also dilated on the strategy adopted by the Pakistan government to cope with the challenges posed by the coronavirus pandemic, since its emergence in the country in February this year. “In Pakistan, we had a successful policy of ‘smart lockdowns’,” he said.

“Our efforts were aimed at ensuring that not only do we save people from the virus, but also prevent them from dying from hunger. We provided a relief package of around $8 billion – which was almost 3% of our GDP – to support the poor and to keep the economy afloat at the same time.

Imran said that so far, this strategy worked “but now we are confronted with a far more aggressive second wave of the virus. We are facing now the challenge of maintaining and reviving our economic growth as well as dealing with increasing number of cases which are occupying our hospital beds”.

He reminded the summit about his call for “Global Initiative on Debt Relief” in April this year. He expressed his gratitude to G-20 for debt suspension and its subsequent extension till June next year. “We also appreciate the rapid lending facilities activated by the IMF and the World Bank,” he added.

To underscore his call for urgent global action, Imran said that five developing countries have already defaulted on their debt and warned that others are about to follow. “There are disturbing reports from the World Food Programme of possible famines in some parts of the world,” he added.

“If economic collapse is to be averted in a number of developing countries due to the Covid-19, the international community must identify and implement some key priority actions. Without economic security, conflicts and disputes will persist and proliferate across the world,” he said.

He expressed the hope that the ‘Financing for Development’ discussions initiated by the UN secretary general and the prime ministers of Canada and Jamaica, which have identified hundreds of options to support the developing countries, will culminate in some concrete actions soon.