US has never been this close to Pakistan: Trump 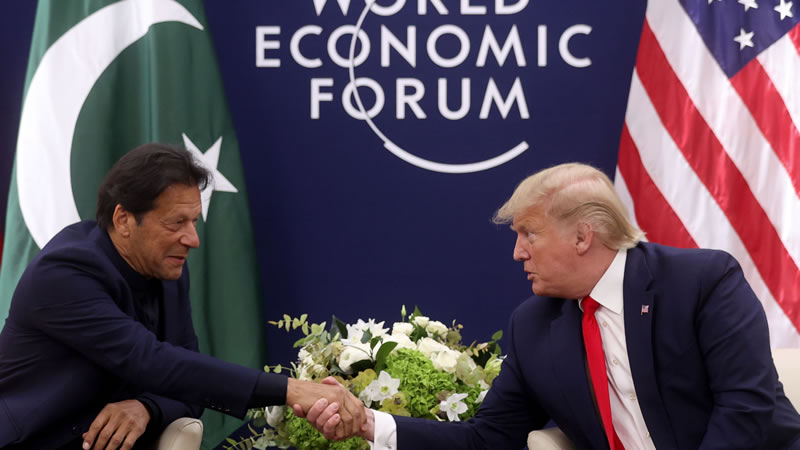 US President Donald Trump said on Tuesday that the United States has never been as close to Pakistan as it is right now and that he will discuss the Kashmir issue with ‘friend’ Prime Minister Imran Khan on the sidelines of the World Economic Forum (WEF) summit.

Prior to a private meeting, the two leaders spoke during a media briefing on the sidelines of the summit being held in Davos.

Reiterating Pakistan’s desire for peace and continuity of its efforts for regional stability, Mr Khan said he would talk to President Trump on the situation in Afghanistan. The US president, while referring to Mr Khan as his friend, said he would speak to Indian Prime Minister Narendra Modi about the Kashmir issue. “We’re talking about Kashmir […] if we can help, we certainly will be helping. We’ve been watching that and following it very, very closely,” said President Trump.

Mr Khan said: “Mr president, it is good to see you again. Yes, there are issues we want to talk about. The main issue is Afghanistan because it concerns the US and Pakistan.

“Fortunately, we are on the same page. Both of us are interested in peace there and an orderly transition in Afghanistan with talks with Taliban and the government.”

He said it was always hoped that the US would take part in resolving the issue because no other country could.

The US president avoided responding concretely to a question by a reporter whether he would also visit Pakistan as he was due to visit India. “Well, we are meeting right now. I wanted to say hello,” he said. However, he added, the US and Pakistan were getting along very well. “We have never been closer with Pakistan than we are right now,” he claimed.

The occasion marks the third time the two world leaders have met since the premier assumed office in 2018.

The meeting comes against the backdrop of Foreign Minister Shah Mehmood Qureshi’s trip to the United States, where he met his counterpart to defuse regional tensions.

The Time magazine has featured Prime Minister Imran Khan, along with other world leaders, on its cover page yet again in a special issue on the WEF.

The magazine’s cover featured the five leaders sitting on a chairlift with the snow-covered Swiss Alps in the background. US President Donald Trump and young climate activist Greta Thunberg can also be seen sitting together on another chairlift in the background of the illustration.

The prime minister will deliver a keynote address at the WEF special session today (Wednesday) and also interact with corporate leaders at the Pakistan Strategy Dialogue.

According to the Foreign Office, PM Khan will speak to senior international media persons and editors during a session with the Forum’s international media council. Throughout his engagements at Davos, the premier will share Pakistan’s vision and achievements in the areas of economy, peace and stability, trade, business and investment opportunities.

He will highlight the current situation in India-held Jammu and Kashmir, and Pakistan’s perspective on key regional and international issues, the FO statement added.

This year marks the 50th anniversary of the WEF where political leaders, business executives, heads of international organisations and civil society representatives will deliberate on contemporary economic, geopolitical, social and environmental issues.