Australian fires: Victorians urged to leave amid fears ‘heat spike’ will cause bushfires to merge 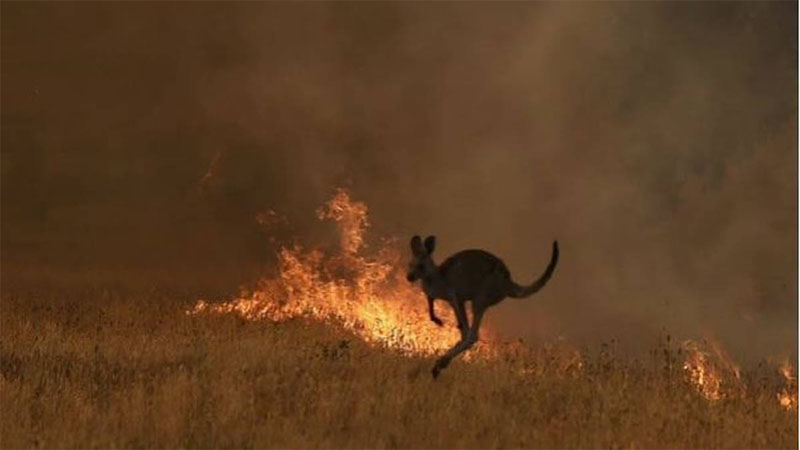 Residents in large areas of Victoria have again been advised to leave their homes before a day of “extreme” fire conditions throughout south-eastern Australia that could see the merging of at least two major fires.

At least 5% of Victoria has already burned. Authorities sent a text message to East Gippsland and the north-east region on Thursday advising people within the at-risk area, which extends from the New South Wales border to the coast, to evacuate before “heat spike” conditions on Friday.

Temperatures were forecast to reach more than 40C in parts of East Gippsland and the north-east, and wind gusts of up to 90km/h are predicted as a south-westerly change drives a line of fire back to the alpine towns of Bright and Harrietville.

NSW is also bracing for severe fire conditions, with temperatures forecast to reach more than 40C in large parts of the state, including 42C in Penrith.

‘If you are told to leave, leave,’ Daniel Andrews warns – as it happened
Read more
In South Australia, more than 200 firefighters are battling to contain a fire that has burned more than a third of Kangaroo Island and is threatening to increase in size under “difficult firefighting conditions” on Friday.

And in Western Australia, major supermarket chains confirmed they were experiencing supply shortages from the extended closure of the Eyre Highway, which has been closed for more than two weeks due to a bushfire near Norseman.

The death toll from the bushfire season has risen to at least 26 people. A helicopter pilot on the south coast of NSW made a lucky escape on Thursday, climbing free from the cabin of their water-bombing aircraft that crashed and sank into a dam at the Ben Boyd national park at Edrom, south of Eden.

The Victorian premier, Daniel Andrews, who earlier extended the state of disaster declaration for 48 hours, said the “leave now” message on Thursday was the clearest signal the government could send that it was not safe for people in bushfire-affected areas to attempt to stay and defend their homes.

“People have a right to stay and defend their property,” Andrews said. “But in putting that plan in place they also have to … make a judgment about: is this fire so severe; if it’s creating its own weather; if you have convection columns that are almost a molten tornado … that might be something that is well beyond the planning that you have done.”

More than 10.7m hectares of Australia has burned since October, including 1.2m hectares in Victoria. Economists from ANZ have predicted it could cut 0.1% to 0.2% from Australia’s already sluggish economic growth figures, and take much more than the $2bn pledged by the federal government to rebuild.

The billionaire mining magnate Andrew Forrest pledged $70m, most of which will go towards establishing a new fire research agency at his own charity. More than $150m has also been raised through donations to various relief funds and fire agencies.

The Victorian emergency commissioner, Andrew Crisp, said there was “every chance” that the 60,000ha Abbeyard fire could join with other fires burning in the Alpine National Park around Mount Hotham, including the 600,000ha Gippsland fire east of Omeo.

Those fires also have the potential to join up with the 280,000ha Corryong fire, which has begun to merge with a fire on the NSW side of the border in the southern highlands. Three fires in Gippsland merged during extreme weather last week, which saw the fires form separate convection columns that were drawn together, and Crisp said that could happen again.

“It’s not an unreasonable scenario,” Crisp said. “The point is if that’s going to happen, we don’t want people in the way of the fire.”

The Abbeyard fire triggered evacuation warnings on its western front for Carboor, Whorouly, the King Valley, and communities around Mount Buffalo on Thursday. The area is a mix of national park, state forest and pine plantations.

Forecast conditions on Friday are for a hot northerly wind swinging to a gusty south-westerly in the afternoon or early evening. South of the ranges, in Gippsland, the change could be followed by up to 15mm of rain, but north of the ranges it will be heralded by dry thunderstorms, which could potentially start new fires.

The change is forecast to reach Bright after 8pm and turn the 80km-long northern flank of the Abbeyard fire into a fire front. That could send embers the valley around Bright which is 20km to the northeast through thick, dry forest.

Peter Roper is the mayor of the Alpine shire, which includes Bright and the ski fields. He urged locals to heed evacuation warnings but said he was concerned people may take those warnings less seriously than they did last weekend, because the worst-case scenario had not yet eventuated.

“People don’t like to be displaced,” Roper said. “I fear if they have left once and they have come back, it will be harder to move them [a second time].”

The Alpine shire is 92% national park and state forest, and Roper said the fires were unlikely to be extinguished until the autumn rain began in March. The area also burned in 2003, 2006 and 2009.

“If we do come under ember attack, the sky goes black, you can’t hear very well, you can’t see very well … It looks like a sci-fi movie gone wrong,” Roper said. “The damn thing creates its own energy and before you know it you have lost it.” – The Guardian

US Envoy Alice Wells to Arrive in Pakistan on January 19

US Envoy Alice Wells to Arrive in Pakistan on January 19