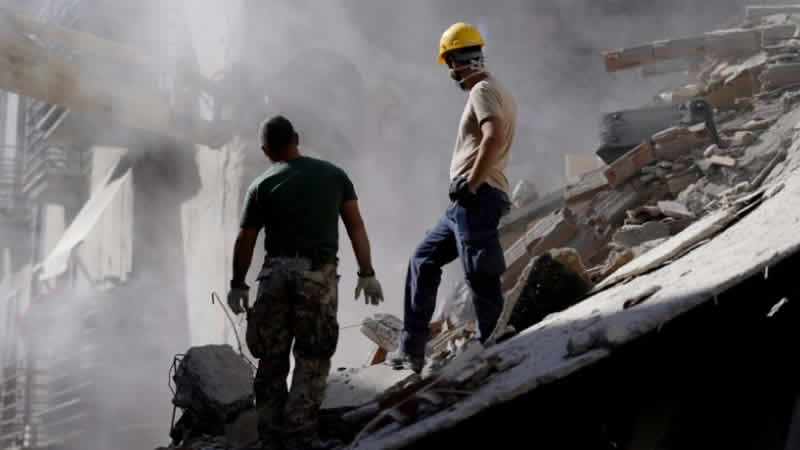 A powerful earthquake shook central Italy on Wednesday, leaving at least 159 people dead and a trail of destruction across several mountain villages packed with holidaymakers.

With 368 people injured, some critically, and an unknown number trapped under rubble, the death toll from the pre-dawn quake was expected to rise further, officials warned.

Amid scenes of carnage, dozens of emergency services staff and volunteers were preparing to work through the night in the hope of plucking more survivors from the ruins. The rescue efforts “won’t slow down during the night”, the head of the civil protection agency Fabrizio Curcio told public broadcaster Rai, giving an updated toll of 159 dead. He did not say how many people were still thought to be missing. Prime Minister Matteo Renzi had earlier said at least 120 people were killed in the earthquake. “This is not a final toll,” he had warned after visiting the badly hit village of Amatrice. Hundreds of people were to spend a chilly night in hastily assembled tents with the risk of aftershocks making it too risky for them to return home.

Scores of buildings were reduced to dusty piles of masonry in communities close to the epicentre of the quake, which had a magnitude of between 6.0 and 6.2. It hit a remote area straddling Umbria, Marche and Lazio at a time of year when second-home owners and other visitors swell the numbers staying there. Many of the victims were from Rome. The devastated area is just north of L’Aquila, the city where some 300 people died in another quake in 2009. Most of the deaths occurred in and around the villages of Amatrice, Accumoli and Arquata del Tronto. Guido Bordo, 69, lost his sister and her husband after they were trapped inside their holiday house in the hamlet of Illica, near Accumoli. “There’s no sound from them, we only heard their cats,” he told AFP before the deaths were confirmed.

“I wasn’t here. As soon as the quake happened, I rushed here. They managed to pull my sister’s children out, they’re in hospital now,” he added, wringing his hands in anguish. Among the victims was a nine-month-old baby girl whose parents survived, an 18-month-old toddler and two other young children who died with their parents in Accumoli. Two boys aged four and seven were saved by their quick-thinking grandmother, who ushered them under a bed as soon as the shaking began, according to reports. She also survived but lost her husband. Premier Renzi said it was too early to consider what might have been done to prevent the disaster. Today is the time for tears and emotion,” he said, vowing that his government would start reconstruction work first thing on Thursday.

It was Italy’s most powerful earthquake since the 2009 disaster in L’Aquila. Half the village has disappeared,” said Amatrice mayor Sergio Pirozzi, surveying a town centre that looked as if had been subjected to a bombing raid. The tremors were strong enough to be felt 150 kilometres (90 miles) away in Rome, where authorities ordered structural tests on the Colosseum. Some of the worst damage was in Pescara del Tronto, a hamlet near Arquata in the Marche region where the bodies of the dead were laid out in a children’s park. With residents advised not to go back into their homes, temporary campsites were being set up in Amatrice and Accumoli as authorities looked to find emergency accommodation for more than 2,000 people. Amatrice is a hilltop beauty spot that claims to be home of amatriciana, one of Italy’s favourite pasta sauces. It is popular with Romans seeking cool mountain air at the height of the summer.

It was packed with visitors when the quake struck at 3:36am (0136 GMT). Three minutes later the clock on the village’s 13th-century tower stopped. The first quake measured 6.2, according to the United States Geological Survey (USGS). It measured 6.0 according to Italian monitors, who put the depth at only four kilometres. A 5.4-magnitude aftershock followed an hour later. Italy is vulnerable to earthquakes. The 2009 tremor in L’Aquila led to lengthy recriminations over lax building controls and the failure of authorities to warn residents that a quake could be imminent. David Rothery, Professor of Planetary Geosciences at Britain’s Open University, said the shallowness of Wednesday’s quake had made it more destructive. But he added: “Unlike the L’Aquila quake, which was preceded by swarms of smaller quakes and led to claims unjustified in my view that the eventual big quake should have been predicted, this one appears to have struck out of the blue.”

Pakistan 260-6 Against England In 1st ODI