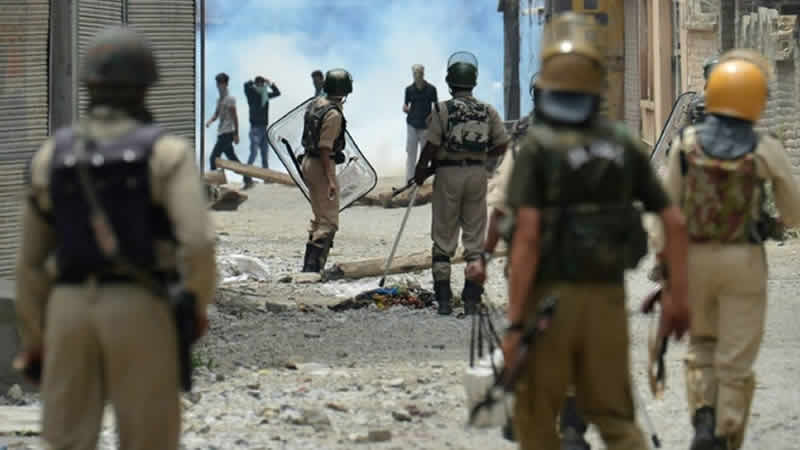 Hundreds of protesters tried to storm a military airbase in Indian-held Kashmir on Monday, as the death toll after deadly clashes between Indian forces and demonstrators reached 32.

Clashes continue to intensify on Tuesday. Most of the killed protesters received gunshot wounds as Indian forces fired live ammunition and tear gas to try to enforce a curfew imposed across the Indian-held Kashmir Valley.

Thousands again defied the curfew to take to the streets on Monday. Police said several hundred protesters tried to storm an Indian Air force base about 25 kilometres (15 miles) south of the capital Srinagar as the worst civilian unrest since 2010 spread. A few hundred protesters stormed the air force base,” said a senior officer on condition of anonymity. We do not know if firearms were used, but the protesters were pushed back,” he said, adding there were no immediate reports of casualties. Protesters also set police stations and vehicles on fire.

The demonstrations follow the killing on Friday of Burhan Wani, a 22-year-old commander of Hizbul Mujahideen (HM), during a gun battle with government forces. HM is one of several home-grown groups that have for decades been fighting around half a million Indian troops deployed in the region, calling for independence or a merger with Pakistan. Around 300 people have been injured, including nearly 100 police, and hospitals say they are overwhelmed.

There were also reports of injured protesters being targeted  one local doctors’ association said Sunday that tear gas canisters had been fired inside a hospital emergency room. Another group, the Jammu and Kashmir Coalition for Civil Society, alleged that police had attacked ambulances taking the wounded to hospital. The state government has called for calm and has cut off the Internet and mobile phone networks to try to stop the protests spreading. It is the worst civilian violence to hit the restive region since 2010 when mass protests broke out against Indian rule.