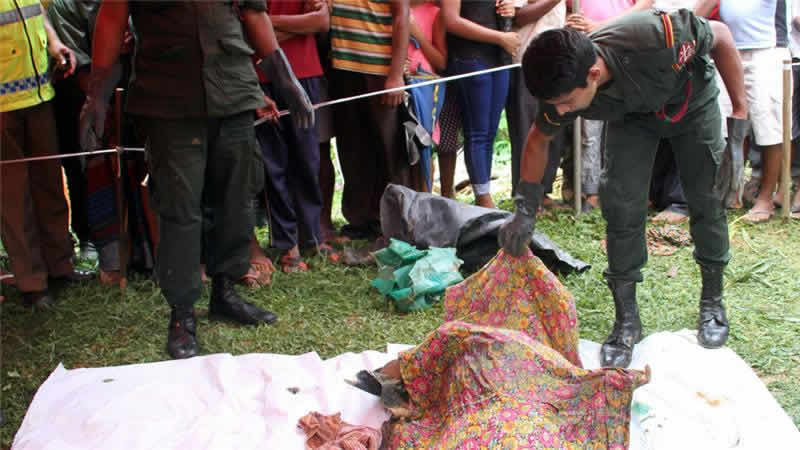 In Siripura, one of three Sri Lankan villages completely buried by a massive landslide a week ago, a grieving Priyanthi Sudeepani, 42, continues to hold on to hope for her son’s return.

Yet, most here are aware that no survivors will be found after mudslides ploughed into their villages, killing 101 people and leaving 107 others missing on May 18. N early 2 90,000 Sri Lankans have been affected by floods and landslides since last week. “A plane crashed into the mountain, so I thought, and then a ball of fire came tumbling down taking away my entire family,” a sobbing Sudeepani told Al Jazeera from a relief camp, kilometres away from what was once her village.

Inclement weather that triggered the mammoth landslides in three hamlets in central Sri Lanka affected more than 10,500 people. Rendered homeless, they have taken temporary refuge in dozens of relief camps. For villagers such as Sudeepani, the shock of losing homes and all prized possessions in a split second is overshadowed by the reality that their loved ones too are buried beneath. “I am waiting with hope, please help me to find them,” said Sudeepani, hands clasped in a pleading gesture. But a rescue official said there is no chance of that happening. “There is no question of survivors here. It is now assumed all those missing are dead,” said the head of relief operations, Major-General Sudantha Ranasinghe.

More than 200 military personnel have been deployed to the disaster zone to work with volunteers . The Aranayake landslides are the worst disaster in Sri Lanka since the 2004 tsunami killed more than 30,000 people. Many survivors are still in shock. Inside temporary shelters, the slightest noise makes some rush to a corner where they huddle with hands covering their terror-struck faces, fearing another rolling hill is ready to bury more people.

Some still speak incoherently, unable to explain their anguish. Those who have taken temporary shelter at relief centres have also been receiving counselling. “There is the fear of the unknown – and the known. They fear a future uncertain and the return to villages that no longer exist,” said Mahieash Johnney from the Sri Lanka Red Cross Society. Kusumseeli Geekiyanage, 57, accused authorities of not issuing warnings of any impending disaster, despite days of heavy rain. She said no evacuation orders were given. “There is not a trace of our village any more. No trace of our homes, our people,” she said, crying. “There is no Siripura. It’s completely gone.”

Nearby, many villagers have refused to take up temporary shelter at relief centres, preferring to stay despite the risk to their personal safety. “Some survivors wanted to stay on in the hazardous zone. Evacuation to safer locations was made difficult by their resistance. They feared their properties and possessions would be lost, but look what has happened? Nature’s fury has not spared them of anything,” said Brigadier Jayanath Jayaweera, Sri Lanka’s military spokesman. In 2002, Sri Lanka’s National Building and Research Organisation declared Aranayake a “highly hazardous area” not suitable for human habitation, made more dangerous by bad land-clearing practices. At Sri Seelananda Maha Vidyalaya in Bulathkohupitiya, the worst-hit village, Keerthiratne Guruge, 48, said villagers are angry with authorities because of the lack of warning.

“Nobody knew – and see what happened,” said Guruge, gesturing towards the displaced families inside a relief centre. “They [the authorities] claim some public announcements were made, but there isn’t anyone who heard one. Do authorities wait till entire villages are buried? You can never give our homes back, our village back,” he said, fighting back tears. As the rescue workers continue to trudge their way through muddy terrain searching for bodies, the task was made difficult by slippery slopes and the inability to transport heavy equipment. “In some areas, there are compost pits and agricultural wells, which are veritable deathtraps as they are now covered by layers of mud,” explained Major-General Ranasinghe. Another landslide hit Matala Kanda in the Aranayake area on Saturday with no casualties reported. Yet, it triggered a new wave of panic among survivors. The next phase in their ordeal is return and resettlement, having to go back to destroyed homes and mourn the dead.