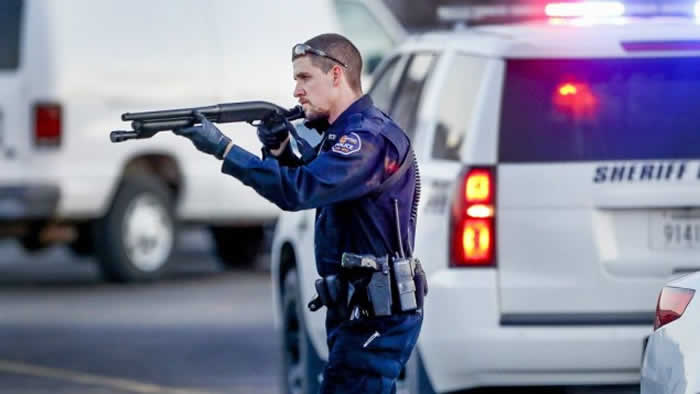 At least four people were killed and up to 30 wounded Thursday when a gunman opened fire at a lawn mower factory in a small Kansas town, police said. Harvey County Sheriff T. Walton said the number of victims could rise to as high as seven.

He said the gunman, an employee at Excel Industries, located in a tight-knit community north of Wichita, was among the dead. “The shooter has been shot and killed. He’s an Excel employee,” Walton said. “Authorities killed him.”

“This is just a horrible incident that happened here,” he said. “There’s going to be a lot of sad people before this is all over.” Local media identified the gunman as Cedric Ford, who worked as a painter at the factory and had posted a picture of himself on Facebook with an assault rifle. He also posted a video of himself firing an assault rifle in what appeared to be a wheat field. Local media said Ford had an extensive criminal record, including a history of prowling, loitering and illegal weapons possession. Witnesses reported seeing the gunman first shoot a woman in the parking lot of the factory before entering the assembly area and opening fire. Walton, meanwhile, said at least two of the victims were shot by the gunman from his car as he drove to the factory.

He said one was shot in the shoulder and one in the leg.“He was traveling and shooting from his car,” the sheriff told local TV. “We want to know what triggered this. We need to know the history of the shooter, and then we have to try to heal.” He said the gunman was shot by police who rushed to the scene. The victims were transported to area hospitals as family members rushed to the factory for news of their loved ones. One man said his 21-year-old nephew had been shot four times in the back and was taken to hospital. Another man who was inside the plant when the tragedy unfolded said people ran for their lives screaming “fire, fire” as the gunman sprayed the assembly area with an AK-47 and a 9mm gun. “I hear about these shootings at theatres and things, and it’s just a mess… it’s horrible,” he said, referring to mass shootings that have become a fact of life across the country.