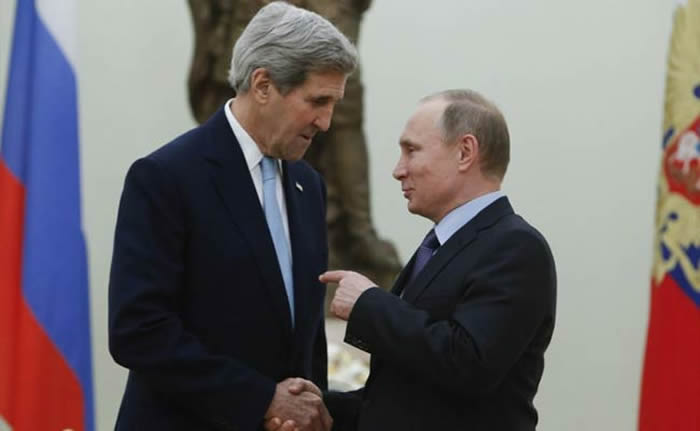 The United States and Russia agreed Tuesday to push ahead with Syrian peace talks in New York this week, after intense talks between US Secretary of State John Kerry and President Vladimir Putin.

After a three-hour meeting in Moscow between Putin and Kerry, Russia and the United States appeared to be a step closer to each other s positions on Syria, though differences remained on the fate of President Bashar al-Assad.

“We support the idea of convening in New York another meeting of the International Syria Support Group at the ministerial level this Friday, December 18,” Russian Foreign Minister Sergei Lavrov said after talks at the Kremlin. Kerry, who said the Moscow talks focused on Syria, counterterrorism and Ukraine, also confirmed the slated meeting would take place. Both he and Lavrov said the negotiations would lead to a UN Security Council resolution to underpin the Syria peace process. We discussed today in great detail the need to accelerate the effort,” Washington s top diplomat said.

“You can t defeat Daesh without also de-escalating the fight in Syria,” he said, using another name to refer to the Islamic State group. Washington and Moscow are the key powers in the peace process, leading talks through the 17-nation International Syria Support Group. After the Kremlin talks Kerry and Lavrov admitted differences remained between the two countries on Assad s fate but stressed they would not let them slow the political process.”What we have said is that we don t believe that Assad himself has the ability to lead the future Syria,” Kerry said.

“But we focused today not on our differences about what can and can t be done immediately about Assad, we focused on the political process whereby Syrians will be making decisions about the future of Syria.” He also said he conveyed to Putin Washington s concern “that some of Russia s strikes have hit the moderate opposition” in Syria, and not just IS. “And I m pleased to say he took that under advisement,” Kerry said. In a grim reminder of the pressing need to end the war, a monitoring group said on Tuesday that suspected Russian air strikes on two markets in Syria had killed at least 39 civilians.

More than 250,000 people have died since Syria s conflict erupted in March 2011, and millions more have fled their homes. Washington is relying on the Kremlin to drag its ally Assad to the table for talks with his rebel opponents. Also looming over the effort is the threat posed by IS to spread the carnage beyond Syria s borders. Kerry hopes that if the regime and the rebels can agree a truce then they, Russia and a US-led coalition of Western and Arab allies can focus their fire on IS.

Thai Man May Go to Prison for Insulting King’s Dog