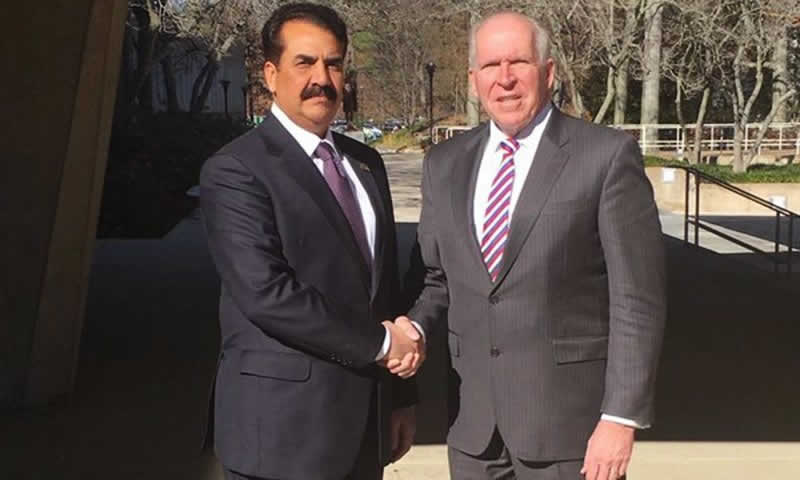 Chief of Army Staff Gen Raheel Sharif and CIA chief John Brennan met on Monday and discussed security challenges facing the region and the way forward to confront these, said a statement issued by the Inter-Services Public Relations (ISPR).

Gen Raheel visited the Central Intelligence Agency (CIA) headquarters in Langley, Virginia, where he held a meeting with the CIA chief.

During the meeting, the COAS specifically highlighted the need for permanent stability in the region, ISPR spokesman Director-General ISPR Lt-Gen Asim Bajwa said in a series of tweets. The army chief stressed the need for a conducive environment in the region for re-initiating an Afghan-led and Afghan-owned peace and reconciliation process, Bajwa tweeted. The CIA chief discussed with Gen Raheel the opportunities presented for the future of an enduring regional peace and praised Pakistan’s efforts for the Afghan reconciliation process, said Lt-Gen Bajwa. Brennan acknowledged the accomplishments of Zarb-i-Azb and its positive impact on the security calculus, he said.

The COAS is in the United States on a five-day visit, in a trip analysts have said will underscore security issues facing Islamabad and Washington in the region as well as the dynamics relating to civilian-military ties within Pakistan. The US Department of Defence said on Monday Washington was grateful that the COAS was visiting the US for consultations on bilateral issues, The visit comes weeks after Prime Minister Nawaz Sharif met with US President Barack Obama at the Oval Office to discuss many of the same issues said to be on his army chief’s agenda, including Afghan peace talks and Pakistan’s nuclear ambitions.